“The Quest,” Part 4 by John Vonderlin 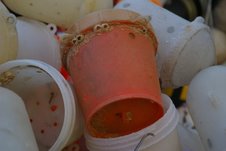 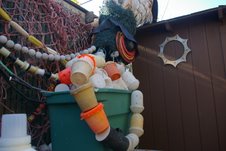 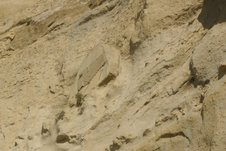 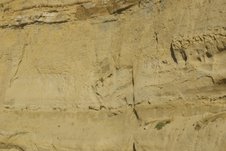 Reaching it, I saw it was a nice one too, festooned with young barnacles, indicating its escape from servitude had occurred some time ago. I love these little Judas goats. Not because they proffer irresistible delights to hundreds of thousands of crabs that are lured into entrapment, soon followed by the gruesome death of being boiled alive for our gustatory delight. And not because their commonness in my marine debris collection allows me to incorporate them in various art pieces, like the tentacles of the monumental, “Squidy Litter.” No. It’s the name embossed on their top: “Scotty Crab Diner Nesting Bait Jar,” that incites my devotion.

But, I digress into unneeded detail–only because just after I had reached this arthropodal death trap lure, bent over, picked it up, then straightened up while examining it, my eyes strayed to the cliff ahead of us and I saw it:

Its concrete plug, 40- feet up the sheer cliff, was stained by minerals to the dun color of the background, with only the small piece of plywood left from its casting form having attracted my attention. Looking more intently, I could see short lengths of rebar sticking out of the corners of the arched slab that projected less then a foot out from the cliff.

After coming up empty at the Long Gulch site, this bit of serendipity had me both thrilled at its discovery and disappointed by its look-but-can’t-touch window shopping reality. Not feeling like going back to my truck to get my jackhammer, dynamite and climbing gear, I opted for a handful of photos of this real, but out of reach bit of wartime and psychedelic history.

As I was photographing the non-opening’s litigation-inspired stopper, I realized that the cave with the initials must be close. So close, that the chance of the Z.E.K. initials being related to the Merry Pranksters became a fact in my mind.

Unfortunately, the waves were still surging up the beach to the base of the projecting cliff just ahead, blocking Meg’s and my way. A try at timing my run around the wave-lapped projection only left me stranded part of the way, cowering on a low, wet ledge for several minutes while I waited for a slack period in the waves to backtrack–all the while hoping a sleeper wave wouldn’t make its appearance and put a damper on my day.

Finally, I scampered for dry land, laughing as I outran the oncoming surf. Life is good. Let’s head north to San Gregorio; we’re on a roll.

If you want to fix the tunnel’s location, go to the California Coastal Records Project website, fill in the box above the Quick Search button with #7218047, then click Quick Search. When the photo comes up click on that to access the larger photo of the same area. Look about 40% up the cliff, about 40% from the left; above and slightly to the right of a large boulder sitting on the beach at the surf/beach boundary.

There it is or was at least in 1972. To see how hard it is to find nowadays, do another search for Picture #6235 (2002) (Note the caption: Hideaway’s Beach and put it on your list to visit) Click on that photo to access the huge 15 Meg file photo. Even knowing where it was it is very difficult to see the plug. By pressing the Time Comparison button above the mid-sized picture you can view all the pictures of this area from different years. Enjoy. John Vonderlin