“The Quest,” Part 5 by John Vonderlin 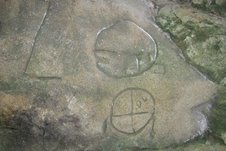 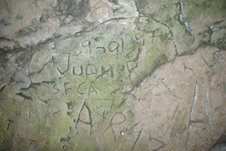 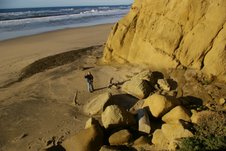 Our stay in “The Valley of Curses,” as it is called Miguel Costanso’s diary, the Engineer for Portola’s expedition, will hopefully be more pleasant than theirs was. Before I start this entry in the Quest’s story, here are a few excerpts from almost 250 years ago, telling about Portola’s visit to this place.

“October 24
The village stood within a valley surrounded by high hills, and the ocean could be seen through an entrance to the west-northwest. There was in the valley a stream of running water, and the land, though burned in the vicinity of the village, was not without pasture on the hillsides.

“October 25
Many of the pack-mules were exhausted by the preceding day’s march, and they were given a rest to-day that they might recover their strength. The scouts were sent out to examine the country with guides from among these Indians. They returned in the evening without any news of importance; they had gone about four leagues to the north-northwest along the coast.

“October 26
As the captain of the company of the Californias, Don Fernando de Rivera y Moncada, was ill of the common sickness — the scurvy — and, because of a diarrhea which attacked many of us, we were forced to delay the march.

But, we leave the valley heading south along the beach for reasons having nothing to do with the “Curses, soiled again,” aspect of Portola’s expedition. Rather our goal, the “Grafitti Grotto,” lies in this direction. If you follow, you may have to ford the wandering San Gregorio Creek, and if the rainy season has broken open the lagoon, but at least no wave dodging is required in this direction. Rather, in this stretch, the cliffs run unusually straight for more then a mile with a nice buildup of sand at their foot, only inundated by the highest of tides or the strongest of storms.

Twenty minutes later we’re at our destination, a small cave at the base of the cliff where it juts out in a small promontory. Seconds later the truth is obvious. The initials just inside the mouth of the cave are not Z.E.K. They are Z.C.K., Zane Kesey’s. The scratch I had assumed was the middle bar in the “E” isn’t. It’s not connected as the other lines in the initials are, nor is it as deep. I photograph it while I’m thinking the kid in the man is going to love to relive this time when I send him this photo. While Dad was holding court, the little prince was exploring his kingdom.

Entering the small space we see his initials are not alone. There are etchings everywhere. There are young love’s plus-signed pairings. There are peace signs and valentines and other less familiar symbols. And perhaps most importantly, there are dates. I see a ‘97 there, here a ‘90, and even an ‘86.

Unfortunately, like the Pranksters during the tsunami, I am flashlightless, unable to explore the deepest, darkest cracks for the more subtle grabs at immortality. Oddly, a small crack at the back of the cave mysteriously allows a bit of light to enter, but it helps little.

Curious how the cave can be allowing light through its rear, I exit and walk south a little further. Ah, I see. The cliff is cut back deeply and in one of the promontory’s eroded channels is a small dark hole that leads into the cave’s rear. Close by there is a large rockfall/dirt landslide with pieces of wood visible on its top. Climbing the pile, I can see that a long time ago, somebody flattened it’s weed-covered top and used the now-rotted boards to restrain the dirt.

A Prankster camping spot? Maybe; I’ll try to find out.

Still curious how close the cave is to the tunnel, we continued south about a 1000 feet until our way was blocked by a sweeping, curved projection of the cliff, extended into the swash zone. Waiting for the waves to momentarily recede, I dashed seaward and looked around the promontory.

There, just beyond, was a beautiful hundred foot long half moon shaped beach nestled beneath the cliff, whose far point I recognized as just beyond where I had been trapped, while trying to continue north after finding the tunnel. I was looking at the appropriately named Hideaway’s Beach. The tunnel and the cave were separated by only about one thousand feet. Add one microgram per foot to this magical little stretch of the San Mateo coast, and it’s no wonder the Pranksters helped launch a wildly colorful and creative tsunami of imagination from here.

When I got home I sent Zane Kesey an email with pictures of his initials and the tunnel’s plug. He replied:

I’ll let you know what they think soon. I’ll also let you know what I find in the darkest corners when I return with a good flashlight. If anyone does likewise, they might see my initials– or did Juan Valdez pass this way with the Portola Expedition? Enjoy John Vonderlin

P.S.The cave can be seen in Picture #6232 on the California Coastal Records Project. It is a small dark shadow at the cliff’s base where the two streams that have heavily eroded the cliffs above meet.