How do we know there aren’t Sea Monsters out their? John Vonderlin has an opinion

Are their Sea Monsters out there?

Hi June,
While researching the Sea Arches on the San Mateo Coast, I came upon something that I found oddly fascinating. It primarily involves Sea Monsters. It might even be the original source of the entertaining, but seemingly fanciful, story you published by Galen Wolf, about the the Tunitas Sea Monster.

You see, there really was a day in 1925 that a Sea Monster washed ashore north of Santa Cruz. A Giant Sea Monster that scientists, journalists, and laymen were unable to convincingly identify as a known form of sea life. A Sea Monster that was tentatively identified at various times, as an extinct-for-many-millions-of-years Plesiosaurus, or a far astray Beaked Whale, or various other cryptozooitic animals, unknown to Mankind.

A Sea Monster whose descendants may still lurk in the Monterey Submarine Canyon, just off our coast. An abyss which offers the deepest, most mysterious depths on this side of the mighty Pacific Ocean. Depths that despite our developing technology are only slowly and begrudgingly revealing their otherworldly inhabitants to us.

This came to my attention because I borrowed from Meg, a new book, “Then and Now: Santa Cruz Coast.” It’s primarily about the numerous and famous sea arches of Santa Cruz, and their demise through the years. Since reading it, I’ve been researching where the arches on the San Mateo Coast are or were, what causes them to form, what destroys them, etc.

[Photos below are of arches once found around the Moss Beach area. If you know of more arches, please contact John, see email above.] 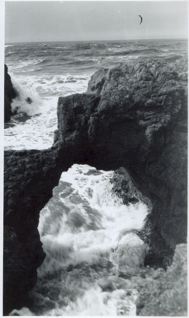 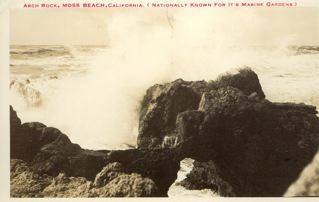 That’s when I came upon a Cryptozoology site (Think Yeti, Sasquatch and Nessie) that had the story about the Sea Monster on Moore’s Beach. Whether this beach’s namesake Charles Moore, is a member of the Alexander Moore family, who first settled Pescadero, I don’t know. Nor do I know if he is related to Charles Moore, the wealthy scion, who created the Algalita Foundation, an environmental organization dedicated to informing the public of the dangers of the ever growing amounts of plastics in our oceans, one of my favorite causes.

But I do know, as an inveterate, perhaps obsessive beachcomber, that I have often fantasized about making the kind of find Mr. Moore made that day. Just as powerfully, I have feared finding the beached body of those lost at sea or swept from the shoreline’s rocks by Neptune’s wrath. I was reminded of that recently when my last two trips to Tunitas Beach have turned up “The Contender’s” numbered Fish Tags, the last remnants of a fatal sinking several years ago. But, back to Sea Monsters.

Though Moore’s Beach has since been renamed Natural Bridges State Beach, (hence the Sea Arch connection) Moore’s name still lives on with the named-for-him Moore Creek, located nearby.

Before I link to the website that has pictures of the Sea Monster, local newspapers’ accounts of people who viewed it, and analyses by scientists who studied it, I wanted to insert, a perhaps, hard-to-believe account by Mr. E.J. Lear, whose story occurred several days before the Sea Monster washed ashore, but was related several days later to a reporter from, “The Santa Cruz Sentinel.” Whether there is a connection I don’t know.

“I was driving a team toward Capitola, when suddenly I was attracted by some young sea lions not far out. They were lined up and several large lions were swimming back and forth in front of them. Much farther out I saw the water being churned to foam and thrown high up in the air. It was shiny and I took it for a big fish. A dozen or more lions were battling it, and every once in a while all would rise out of the water. It looked to me as though all the sea lions were attacking it beneath as the monster came out of the water several times. In telling of the battle of that night I estimated its length at 30 feet.

“The battle continued as long as I could see it from the road. I was driving toward Capitola with a load of sand. I have not seen the monster on the beach, but it may have been that which I saw.”

Though I am a hardcore skeptic, particularly concerning cryptozoological stories, I realize that the ocean is the last great frontier on our planet, and that there are still many mysteries it has not yet divulged. I’d urge you also to keep an open mind and wish you a Happy Beachcombing New Year. The truth is out there and it might just wash ashore. Enjoy. John Vonderlin

This entry was posted in John Vonderlin, Sea Monster. Bookmark the permalink.