I came on this while researching where the jasper on South Farallon Island might have come from locally. I thought you might want to see it. I’m going to keep my eyes open from now on when I’m looking at coastside rocks. I might just find a local “Rubbing Rock.” I could write about. I used CCRP to scan the ten miles or so of the Sonoma State Beach Park unit and believe I found them. It’s close to Goat Rock, something I’ve climbed on, near the Russian River mouth. Pictures #12455-12458. Their local name is Sunset Boulders or Sunset Rocks. It’s a popular bouldering site. 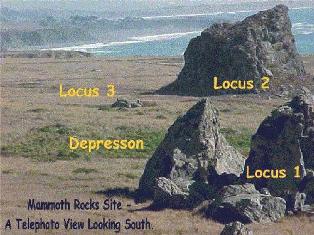 In 2001, I discovered what I believe to be Rancholabrean rubbing rocks on California’s North Coast (Parkman 2002a, 2002b, 2002c). (1) These are features that I believe were used for grooming by now-extinct Ice Age megafauna such as Mammuthus columbi and Bison antiquus. The rocks are located on the coast of Sonoma County about 75 km north of San Francisco, within Sonoma Coast State Beach, a unit of the California State Park System. To date, I have located six sites consisting of one or more rubbing rocks, all within an area about 4 km in diameter. The two main sites are referred to as Mammoth Rocks and Jasper Rock.

The Mammoth Rocks site consists of four loci of rubbing rocks, separated by about 300 m (Fig. 1). Two of the loci consist of very large blueschist seastacks (20 and 30 m tall). The other two loci are smaller blueschist boulders (4 and 5 m tall). The four loci surround an enigmatic wetland that I believe may represent a relic animal wallow.

Jasper Rock is located 3 km south of Mammoth Rocks. This site consists of a single jasper (red chert) boulder which stands about 2.5 m tall. A shellmidden (CA-SON-365/H) is located 100 m south of the boulder. 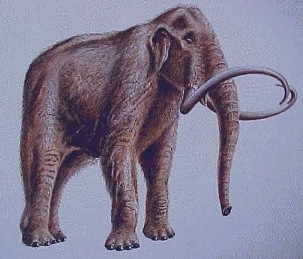 Over the past two years, I have developed what I term, “The Rancholabrean Hypothesis.” Simply put, the hypothesis proposes that elements of the Rancholabrean landscape (e.g., megamamal rubbing rocks and wallows) still survive and can be detected on the contemporary landscape. Furthermore, by identifying these Pleistocene features, it may be possible to map the archaeological presence of the area’s first people. Since the initial discovery of the Sonoma Coast rubbing rocks, a loose-knit team of researchers (including archaeologists, geologists, paleontologists, geomorphologists, pedologists, physicists, chemists, zoologists, botanists, and molecular biologists) have been working with me to confirm or deny the Rancholabrean Hypothesis. (2) The following is an update on some of the progress that we have made to date as well as our plans for future research. 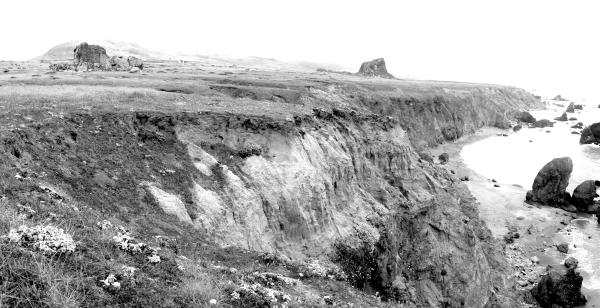 Also, check this out this story from Berkeley Science Review, Spring 2006, click here

This entry was posted in John Vonderlin, Mammoth Rocks. Bookmark the permalink.