New Theory: Where Did The Pebbles From Pescadero’s Pebble Beach Come From? 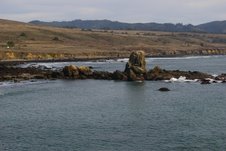 Hi June,
After visiting the observation tunnel, then collecting my 58th tire off the beach at Pescadero, I visited Invisible Beach, to see if Neptune’s Vomitorium, was regurgitating any non-buoyant marine debris yet.

But enough sand had moved offshore that there were a few small patches featuring the same smooth colorful pebbles that created nearby Pebble Beach, famous in the mid-to late-1800s.

I’m expectantly awaiting, perhaps perversely anticipating, the arrival of the fierce storm with its accompanying 25- foot- plus waves that is supposed to hit tomorrow (Friday.) This storm should complete the stripping of the sand covering the hidden gravel beds. Most importantly, it should clear the throat of the channel through which the non-buoyant marine debris travels up onto the beach, allowing me to begin collecting it again. For me, it’s kind of like Christmas all over again.

In your book, “The Coburn Mystery,” you recreated the trial between Loren Coburn, the wealthy landowner, who claimed Pebble Beach and all its treasure, and the hundreds of citizens of Pescadero and t surrounding Coastside, who demanded the continuation of their traditional access to this very special place. The main area of dispute focused on the origin of the colorful pebbles.

Coburn maintained the pebbles washed down from his land, settling on the beach and therefore they were his. He owned them. Others maintained that they had been cast up by the sea. As I’ve stated before, I’m quite sure that’s correct. I firmly believe an offshore quartz ridge is the source for the semi-precious pebbles at Pebble Beach, Invisible Beach and all the little pocket coves over a several mile stretch in that region. You can find small quantities of red and yellow jasper, clear quartz nodules, agates, moonstone agates, aventurine, and many other members of the quartz family sprinkled on the beach almost anywhere in the area.
But, this story is about jasper sprinkled somewhere else. Jasper found where it shouldn’t be found. Jasper that probably got there by a mechanism I was unfamiliar with. Oddly, it’s a mechanism similar to the one at Neptune’s Vomitorium, but even stranger.

I came upon this tidbit while reading an old book I got from the library called, “Geologic Guidebook of the San Francisco Bay Counties,” printed in 1951 by the Division of Mines, when Earl Warren was Governor. There was a fascinating chapter on the Farallon Islands. In one section, the book details the harvesting of millions of sea bird eggs for the coastal markets. Fortunately that was ended in the early 1900’s.

But what really caught my attention was the author’s mention of encountering erratics everywhere on the island. In geology, the term erratics means something different than when applied to my friends. Most often it is part of the term “glacial erratics.” These are rocks that are transported long distances by glaciers from where they originated and deposited in areas where they just shouldn’t be found. They provided the evidence that Ice Ages had repeatedly encased the Northern Hemisphere, including the United States with a thick sheet of ice.

The erratics found all over the South Farallon Island (a granitic mass, from the highest point to the waterline) “are pebbles of jasper, in all respects similar to those found on any beach or in any stream in California where the adjacent rocks are the so-called Franciscan chert. These pebbles are well-rounded, and range in size from half an inch to two inches in diameter; many of them slightly polished. There is no definite explanation for their occurrence, but three possibilities may be suggested.”

The author of the “Geological Guidebook of the San Francisco Bay Counties” quickly discounts the first two possibilities and continues: “A third possibility is that the pebbles were swallowed by marine mammals–fur seals and sea lions–as is their habit, and then disgorged when they came on land. When South Farallon was occupied by more then 200,000 of these animals they must have ranged over most of the area. The fur seals especially are excellent rockclimbers and land travelers–on Alaskan islands early drives (?) as far as 12 miles were commonplace. This may seem a far-fetched theory, but is within the realm of possibility.”
I’d never before heard that marine mammals swallowed rocks. But they do. Websearching the terms “gastrolith and marine mammals” brings up lots of websites that verify it is a well known and researched fact.

One site stated: “It’s not unusual for seals to ingest stones, perhaps as ‘weight belts’ or to aid in digestion. The stones could eventually be deposited far from the source. Recognizing them as gastroliths might be possible by investigation of microscopic toolmarks and polish.”

Another source: “The New Zealand sea lions feed on octopus, small fish, crabs, mussels, and penguins. They swallow pebbles (gastroliths) to aid in digestion. Their intestines may contain numerous gastroliths of irregular shapes. They vomit these gastroliths, as many as 20 at a time, along with squid tentacles and small fish.”

Possibly the weirdest website described the operation on a captive seal called ‘Missy’ containing in her stomach: two pounds of rocks, an AA battery and 97 cents change.

I wonder how this information might have been used at the Pebble Beach trial, Loren Coburn Vs. The Good Citizens of San Mateo County? Better yet, was Pebble Beach the source of at least some of those pebbles found on the island?

Or– did the marine mammals get them from the now-submerged quartz ridge when glaciers had locked up so much water that the coastline stretched all the way out to the Farallones?

Whatever the true origin of the pretty pebbles, my odd hobby of collecting marine debris, regurgitated by Neptune’s Vomitorium, is even more fascinating now. Enjoy. John Vonderlin