On Friday I returned to Tunitas Beach to do my version of a Nautilus workout, rescuing tires from the surf and lugging them around. 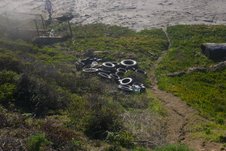 I added six to my pile at the bottom of the hill, making a total of twenty there, and upped my caches north of the creek to 17. As I was resting, sitting on the pile, a gentleman walked up carrying a tire that I had bypassed, that he’d somehow freed from its sandy prison near the surf-line to add to my pile, making the total 21, that most fortuitous of numbers.

We struck up a conversation during which he revealed he’d been cleaning up this beach for over twenty-five years. It seems that Tunitas Beach’s tires are a long- term phenomena. One that had previously been cleared up regularly by a nearby resident who would use a front loader to accomplish what I’ve been doing with sweat, persistence and clackety knees. Unfortunately, the loader broke down, as I probably will do one of these days.

He also dropped some interesting names of visitors to Tunitas at one time or another; the name Baba Ram Dass sticks in my memory. He also gave me leads to local oldtimer’s names that might have some interesting tales to tell about this most interesting of beaches. The gentleman is a very interesting oldtimer himself. George Cattermole is the longtime owner of the San Gregorio store, an avid environmentalist, and a prolific explorer of the beaches and hinterlands of the south coastside.

We’ve exchanged emails and I’m eager to drop by some Saturday when there’s usually music at his eclectic store/bar and share a beer and some stories. Hopefully more on that soon.

There were other items of note on this trip: I collected more tar balls to add to the crate I left by the tire pile. The previous ones, heated up by the warm temperatures of the last week, had melted and were trying to escape through the grating of the crate, but I thwarted them.

At the southern end of the beach, near Mussel Rock, the waves have removed more sand than I can remember, revealing a new group of concretions. 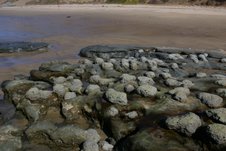 While not as attractive as the others I’ve photographed, and written about, they still were interesting and add one more facet to the buffet of oddity that very strange locale offers.

The 150- gallon gas tank I mentioned in an earlier post, possibly from the sunken “Good Guys,” was still there, so I photographed that too. As well as a massive tangle of ropes that was so heavy with wet sand I could only, with great effort, roll the ropes over and over, up the beach, beyond the waves for later recovery. 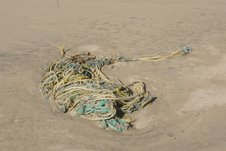 P.S. While this was a pleasant trip to the beach, more interesting then many, I’m impatient to hurry through my description of it so I can start describing yesterday’s adventure, one of the most enjoyable, exciting, trying, and productive trips I’ve ever made to the coast: My wild trip to Acid Beach. That’s coming next. 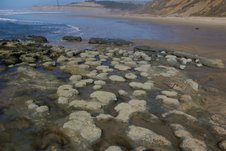 This entry was posted in John Vonderlin, Tunitas Creek. Bookmark the permalink.