Hi June,
We made a pilgrimage to the remains of the Palmer Gulch Trestle yesterday to get some pictures before nature completely erases these most southerly structural signs of the Ocean Shore Railroad’s ambitions to run a railroad down this coast.

As you know the Tunitas station is considered the “End of the Line” for the Ocean Shore Railroad because that was as far as the rails got. The Tunitas Creek Trestle was built south of that, but rails hadn’t been extended over it when the Great Quake of 1906 shook up the company’s finances so badly, its dreams permanently smashed of connecting with the southern section that had reached as far as Swanton in Santa Cruz County.

Though many of the other trestles needed to bridge this missing gap had been surveyed south of Tunitas, only the Palmer Gulch Trestle was built. It stood as a forlorn symbol of dreams unrealized, until a fire caused its collapse decades later. There isn’t much to see nowadays, but the changes in the local topography in the last hundred years give you an idea of what the Ocean Shore would have been in for, maintaining the trestle, had they successfully completed the whole line.

The easiest way to reach the remains is to pay the $10 entrance fee into the private nude beach, reputed to be the oldest in the United States, and park in the lot just north of San Gregorio Beach. 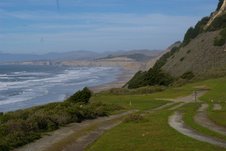 Take the trail to the beach and keep heading north. If that’s closed, just wait for a low tide, park at the San Gregorio Beach parking lot and head north. This way is more interesting with its sculpted cliffs, spectacular caves, 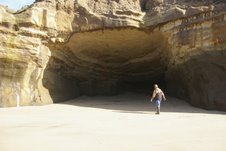 beach debris, and unusual sand dunes at the foot of the cliffs. It’s free too, if you park at the corner of Highway 84 and Highway 1, and take the slightly longer, more interesting walk.

Since the remnants are not easily noticed I’d recommend you familiarize yourself first by examining the California Coastal Records Project photos of this area. Picture #6216 has a caption of Trestle Gap and shows both the gulch and some of the remains if you view the large file. The southern portion of the Ocean Shore right-of-way is the horizontal swath of green at the lower right hand side of the picture, just above the bare part of the cliff rising from the sands of the beach.

The roght-of-way ledge looks like this if you make the risky climb up the slope. 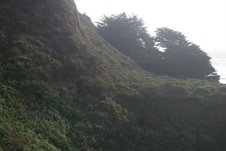 The disintegrating remains of the trestle you can see on the slope look like this up close. 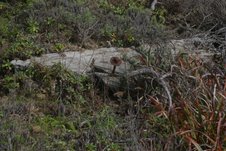 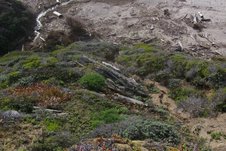 The northern part of the right-of-way, where the trestle’s end rested, has not survived so well. It has been totally obscured by a landslide of loose soil. 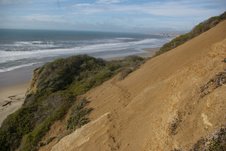 You can see the cliffs of Tunitas where the rails stopped in the background. If you examine the nearby CCRP pictures carefully, you can follow the narrow ledge of the right-of-way all the way back to those cliffs. Or at least where it hasn’t been totally wiped out by landslides or severe erosion.

Heading further north along the beach you can see a good example of the changes the landslides and severe erosion have wrought to this landscape in the last 100 years.

You’ll also see one of the tallest coastal waterfalls in this area. Picture # 6215 on CCRP shows the gully the waterfall occurs in. It’s on the left side just north of the sinuous road snaking down the steep hill. This must not have existed in early 1900 because no trestle was needed in this area. Having experienced the loose soil and dirt-clod-like rocks in the streambed it is easy to believe this has happened since then. The harder rock at the top has kept the stream’s rapid erosion from retreating further inland, destroying the waterfall. 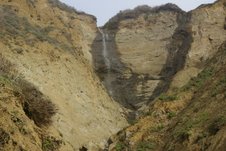 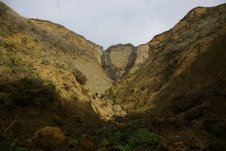 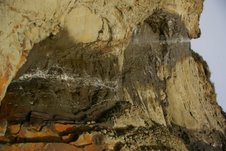 While such rapid erosion found in this new canyon is usually considered bad, especially if you’re trying to maintain a coastal railroad line, it’s probably no coincidence that the nearby beaches are luxuriant with sand when compared to many other places along our coast. Enjoy. John Vonderlin

This entry was posted in John Vonderlin, Palmer Gulch Trestle. Bookmark the permalink.