Remembering the Vicious, Unforgiving Storm of 1998 By John Vonderlin

Meg attended a ten- year anniversary memorial this weekend for the mudslides and flooding that devastated her house and neighborhood in La Honda, during the famous El Nino-generated disaster of 1998.

She and her neighbors celebrated their survival and recovery from several deadly landslides and mudflows that threatened their lives– and took the life of a dear friend in nearby Loma Mar whose home was swept into the raging Pescadero Creek as he slept.

But the effects of the 1998 mudslide disaster lives on in everyone’s memory and each time there’s a strong series of storms like we’ve had lately, everybody gets real worried about a repeat.
.
A repeat of seemingly endless landslides smashing houses and blocking roads for days.

A repeat of floodwaters swallowing up homes and washing out or crippling several bridges.

Add to this extremely bad weather menu, the accompanying high winds that prevented rescue helicopters from removing the injured.

Relying on their own strength, which proved to be powerful, the community rallied and pulled through the difficult time learning many valuable lessons along the way.

I wasn’t there. But much of what I do know about these horrific events, including personal recollections, comes from a U.S.G.S. documentary called “Riding the Storm.” To view the show, click here.

When I decided to write about the landslides, I borrowed Meg’s “El Nino/landslide disaster folder,” for background information. As I was reading, I came upon an email posted to “coastside.net” by Terry Adams, owner of the Ken Kesey house, about a week after the floods and mudslides started.

The family perservered and with the support of the community reached a brighter day.

Meg tells me the same spirit infused her neighborhood throughout the disaster’s aftermath. Today you’d be hard pressed to find any sign of what happened that scary night a decade ago. But, it is obvious in talking to locals that strength truly is fired in the crucible of adversity.

I sent this email***(see below) 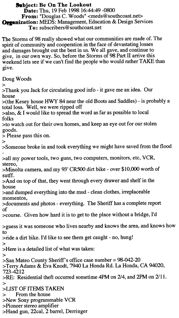 to Terry Adams after reading his posting:

Hi Terry,
As you are aware we just passed the ten- year anniversary of the devastating floods, landslides etc. of 1998. Meg and her neighbors, who were almost wiped out by a landslide, had a party celebrating their survival and recovery. I thought I should write a short story about that time, particularly since it is something she recalls fearfully every time she gets prolonged and heavy rains. I’ve been researching for the story and she lent me her El Nino, flood, landslide folder to help. One of the documents I found was a printout of an email you posted on Feb.11th. It was about the scumbags that robbed and pillaged your home after it was nearly destroyed. I’m sorry you had to go through that, but am glad you have recovered so well. If you would like a copy of that email, let me know and I’ll scan it and send it along. I guess it’s true that anything that doesn’t kill you makes you stronger. Congratulations on making it to a brighter day. Enjoy. John Vonderlin

Thanks John,
Sure, I would love to have a copy of that email. Every year, on February 2nd, we go out and pour some schnapps into the creek, to pacify it symbolically. About two weeks after the flood, with the help of a bunch of friends, we strung a rope across the creek and
pully-ed across all our rescuable stuff, including a TV – I wish I had photos of that! It was fun – we ended up using the pulley system to ride across the creek ourselves.

Subject: Be On The Lookout

The Storms of 98 really showed what our communities are made of. The spirit of community and co-operation in the face of devastating losses and damages brought out the best in us. We all gave, and continue to give, in our own way. So before the Storms of 98 Part II arrive this weekend let’s see if we can’t find the people who would rather TAKE then give.

Thank you Jack for circulating good info – it gave me a good idea. Our house (the Kesey house HWY 84 near the old Boots and Saddle) – is probably a total loss. Well, we were ripped off, also & I would like to spread the word as far as possible to local folks to keep out an eye for their own homes as well as our stolen goods.

Please pass this on.

Someone broke in and stole everything we might have saved from the flood…all my power tools, two guns, two computers, monitors, VCR, stereo, etc., Minolta camera, my CR500 dirt bike – over $10,000 of stuff.

And on top of that they went through every drawer and shelf in the house and dumped everything in the mud – clean clothes. irreplaceable momentoes, documents and photos – everything. The sheriff has a complete report of course. Given how hard it is to get to the place without a bridge, I’d guess it is someone who lives nearby and knows the area and how to ride a dirt bike. I’d like to see them caught. No hung!