Hi June,
I recently got to explore a section of the San Mateo Coast that is virtually unknown to most Coastsiders.

Have you heard of places like Seal Rock, Eel Rock, Poppy Point, Secret Beach or Purisima Falls? Well, neither had I until I began to investigate this isolated, and virtually never-visited two mile stretch of the coast, just a short distance south of the Ritz Carlton Hotel. There are good reasons that this stretch is unknown to most people, it’s inaccessible and mostly unviewable to the general public from dry land. Only boaters or kayakers willing to brave the many shallowly-submerged or jaggedly-jutting rocks just offshore, and the typically rough surf, or the long paddle from the nearest launch spot can tread its virginal sands.

You may have gotten a glimpse from afar of a small part of this spectacular series of beaches if you’ve visited the Cowell Beach Access Viewpoint. From atop a high blufftop viewpoint you get an eagle’s eye view of the mighty Pacific Ocean and its interface with our continent. To the north are the sands of Cowell Beach, down a long, but easy- to- navigate staircase. Directly below you is an unclimbable rock spine stabbing into the ocean 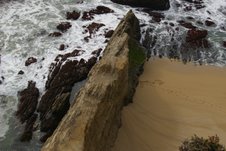 barring any beach-goers travel southward. To the south a broad sand beach disappears from view behind a promontory of the sheer cliffs. 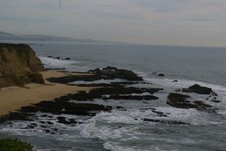 Offshore to the south on the reef, composed of large, flat, low-lying rocks, broken by numerous channels, are scattered groups of Harbor Seals, lounging in the sun, safe from predators and bothersome humans. 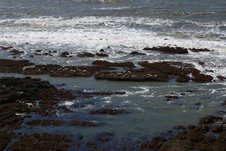 This area is a Protected Area closed to the Public. Please give them a wide berth as you paddle by, as they are much more skittish then other groups more used to seeing passing humans. 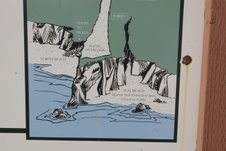 Paddling to the south of the Protected Area there are more open stretches of the beach with fewer rocks where you can make a relatively stress free landing, provided you’ve used commonsense in regard to swell size and wind speed. Once ashore, if you’ve chosen a low tide period, you can traverse the next mile-and -a- half south with only a few seaweed slickened, risky passages. You can identify those areas by studying the large file photos of this area on California Coastal Records Project CCRP. Start at Photo #6147 which shows the Cowell Access Viewpoint, and begin your virtual cyber tour which ends at what I believe is Poppy Point, Picture #6167.

Poppy Point is the end of the line for southward beach travel. 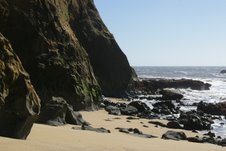 The sheer cliffs from there to just north of Martins Beach have no beach at their wave-battered bases. They do, however, have the greatest number of sea caves of any stretch of the San Mateo Coast, and possibly any stretch of the California coast, at least that I am aware of. There are way more then fifty in the mile- and- a- half south to Shark Fin Rock, including several very large ones shown in Picture #6169. This summer, with any luck, I’ll be posting a picture of what some of these caves look like from inside looking out. Enjoy. John

This entry was posted in Coastside Secret Beaches, John Vonderlin. Bookmark the permalink.