John Vonderlin Says: I think I found the “Mystery Tunnel!”…

Angelo’s email confirmation that there used to be a tunnel, possibly associated with the Ocean Shore Railroad, just north of the most northerly Pescadero Beach parking lot was reason enough for me to try again to find the tunnel, or at least locate where it had been.

Various people have described the tunnel as an initial “bore tunnel” for the O.S.R.R. as well as an explosives storage site for construction of Highway 1, which, I believe, was built on the O.S.R.R. right-of-way in this area.

During the past few weeks, I’ve stomped all over the area, and found no sign of it, but I was LOOKING FOR A TUNNEL. This time I was basically looking for SIGNS OF WHERE A TUNNEL HAD BEEN. Lowered expectations can often lead to success. And, I believe I’ve found where it was.

I suspect, just as with the Prankster’s tunnel, and the nearby W.W. II observation tunnel, that the authorities have eliminated what they considered to be a public nuisance. Having explored many mine tunnels, shafts, etc. in the Mojave Desert, I can understand why they’ve done so, but it’s sad that history was also obliterated along with the danger.

Here’s a picture of the hillside just north of the parking lot. 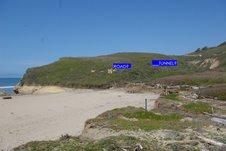 I’ve marked where I believe the tunnel was. I believe this is so because it’s the only anomaly on a generally smooth hill and there seems to be the remnant of a road that runs up the hill and passes just below it disappearing slightly further on.

Here’s a close-up shot of where I believe the opening was. 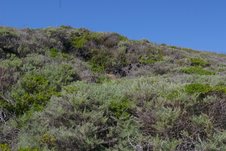 On the California Coastal Records Project (CCRP). website, if you look at 7218061, you’ll see what the area where the tunnel was looked like in 1972. Unfortunately, the angle and clarity of the image doesn’t allow me to see exactly what was there besides a couple of paths.

Lastly, I’ve attached a photo shot from slightly above and slightly to the west of the tunnel. 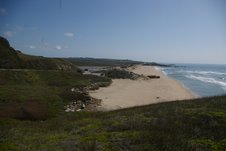 I assume the footprint of Highway 1 is pretty much the O.S.S.R. right-of-way. In author Jack Wagner’s excellent book, “The Last Whistle,” he inserted a chart showing the size of the completed and proposed trestles for the railroad. The Pescadero trestle, never built, was to be only 36 feet high, but 375 feet long. That would neatly carry it from the bedrock near where the present bridge is anchored on the south end, over the Pescadero Creek riparian corridor, to the slightly higher and more solid ground of the low ridge that separates the Pescadero Marsh from the dunes.

Looking at the 1972 CCRP pictures,(#7218063 to 7218065) you can see this ridge has changed very little over the last 35 years, while a considerable amount of sand on the beach has disappeared. Given these facts, I suspect it’s likely that the tunnel stored explosives for construction of the railroad and/or the highway. Perhaps, somebody out there has a picture or knows for sure. Enjoy. John Vonderlin.
.
M