Our April Fool’s expedition to the coast, trying to locate a hole in the ground where the Mystery Tunnel might have been, didn’t satisfy our sense of adventure sufficiently, so we utilized the low tide to continue up the beach from the most northerly parking lot at Pescadero Beach.

About 1500 feet north from where you start skirting the ocean-side cliffs, you can see the W.W.II Observation tunnel above you in the cliff-side.

But, our goal was some 100 feet closer then that. I wanted to photograph one more of San Mateo County’s Sea Arches. This one is relatively small, but nicely formed, with enough cracks in its thin span to give an ephemeral quality to it. I wouldn’t say it has the cachet of the world famous “Delicate Arch,” but it does have some of its qualities and it’s a whole lot easier to reach.

My new modus operandi is to climb on top of the arches and have myself photographed. It seems a time-honored method, as many of the historical photos of Sea Arches have somebody or a crowd of folks or even two horse and buggy teams on top of them. It serves the purpose of providing scale, as well as generating a human interest angle, at least to the photographed. 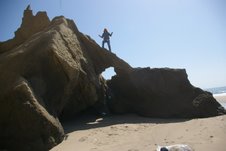 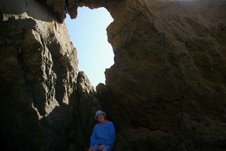 Should you want to visit this “twofer,” the arch and the W.W. II Observation Tunnel, you can locate them on Picture #6248 at the C.C.R.P. website. Unfortunately, because of the angle the photograph was taken from the helicopter, you can’t see either of them. The tunnel mouth is in the canyon right in the middle of the picture. It is just above and to the left of where the seasonal waterfall drops off the cliff to several large rocks on the beach, but hidden by a small ridge. 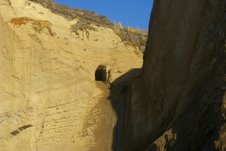 The arch is just about a hundred feet south of the waterfall in the promontory projecting out from the lower part of the cliff. Enjoy. John