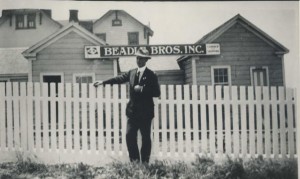 In th 1870s when Colonel S. Evans, author of “A La California” rode horseback into the remote village of Pescadero, he saw a village optimistic about the future.

Behind all that confidence was the lighthouse recently built at Pigeon Point by the U.S. government. The light had been illuminated for the first time on November 15, 1872.

That “slim finger” against the sky became a source of pride for the Pescaderans. Charles Swanton regularly escorted hotel guests on scenic tours into the lighthouse where Captain J.W. Patterson*, “an old salt,” was in charge.

A steam whistle had also been installed and during foggy weather the whistle sounded at intervals, with the blasts lasting four seconds.**

[Approximately $95,000 was appropriated for the Pigeon Point Lighthouse: $83,000 for the lighthouse and other buildings, $12,000 for the keeper’s residence.]

Soon a very small community surrounded the lighthouse: a store, school, post office***, and the blacksmith was building a new house. One of the Steeles was appointed postmaster.

Today it’s so serene at the lighthouse that it’s hard to imagine a bustling community there. But behind the lighthouse stood Pigeon Point Landing–a new wharf and chute, estimated to cost between $12 and $30,000. The men who financed the ambitious project rented the land from Loren Coburn. At the time Coburn was still residing with his family in San Francisco.

The investors modernized the previous primitive cable-rock arrangement, extending the wharf 100-feet into the ocean, dramatically improving the business of shipping. For the first time a vessel could land alongside the wharf, reducing loading time from four to six hours, instead of a couple of days. The “Arcata,” a three-masted schooner, one of the largest ships to stop there, once stayed for more than a week.

To further expedite the the shipping of local lumber and produce, the investors planned to build a “canal” and a six-mile long, three-foot gauge railroad track from Gazos Creek to Pigeon Point Landing. Those familiar with the old cable-rock arrangement, wondered why Loren Coburn hadn’t upgraded the wharf himself.

*Captain J.W. Patterson was the commander of the shipwrecked “Shubrick.” He lived in a two-story white wood dwelling with a red roof. Capt. Patterson told visitors he came to the coast in 1823 aboard the “Mentor,” then sailed to Alaska where he traded furs with the Indians. In 1833 he sailed back to California. Sometime in the late 1870s Patterson was abruptly replaced by a new lighthouse keeper, Capt. Fairchild. “…it seems hard that a gray headed old man who has spent his life in going down in ships and is unprovided for should be removed from a small office to subserve no other ends than those of politics.” [no attribution.]

**In 1872 he Pigeon Point Lighthouse was officially inspected by the government “lampist,” Thomas Winship. There was also a steam fog whistle at Ano Nuevo Island, south of Pigeon Point. It sounded blasts of 15 secodns at intervals of 45-seconds. There was concern that the Ano Nuevo fog signal would be confused with the fog signal at Pigeon Point.

***Before the post office was built at Pigeon Point, folks who lived there rode horseback, six miles north to Pescadero to pick up the mail.