McDonald’s! John Vonderlin Wants to know: Is This Your Balloon?

What is it? A big balloon with McDonald’s advertising that got away? It reads: “Try our Southern-style chicken.” 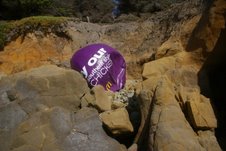 This was one of my finds yesterday. Before I start calling around to find its owner or former owner, as the case may be, I was wondering if the McDonald’s in Half Moon Bay is missing their’s?

Getting this monster flat enough to get into my car must have amused passing motorists on Highway one, as I had to throw myself on it, disappearing into it. I’m not sure if I’m willing to drive to HMB to return it, but maybe some local franchise will take it and ship it back. Enjoy. John 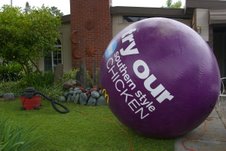 Well, it took a few calls, particularly because the McDonalds managers cut me off every time they put me on hold to go check if their balloon was missing, but I was finally able to trace the origin of the giant purple balloon. It escaped from the Pacifica McDonalds. Or at least they said they were missing their’s. When I mentioned that it might take a while before I was willing to return it, as it would require $20 worth of gas and two hours of my time roundtrip to drive from Santa Clara to Pacifica , they said don’t bother, we have another one. I laughed and said, “Great, I’ll keep it as a trophy.”

Thinking about it, I’ve decided to use it as the Queen Bee of my , “The Party’s Over,” piece of Marine Debris artplay. That consists of large glass spheres packed with my collection of the remnants of thousands of balloons of every type and their ribbons, etc. that were carelessly released into the environment to foolishly celebrate various events and subsequently washed ashore.

Though this thoughtless kind of littering disturbs me only slightly, it is interesting to note that it looks like there will soon be a law outlawing the release of helium-filled mylar balloons into the Wild Blue Yonder. Apparently, their metallic nature causes several hundred short circuits of power lines in California every year. An inconsequential matter I’m sure unless you happen to be watching the finals of “American Idol,” or the Super Bowl. Enjoy. John