Who is this genius, Merrill Bickford? 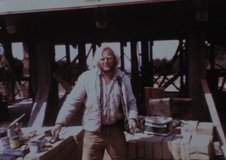 June says: Russell, I remember meeting Merrill. He’s the man I met at AN, near the big sculpture with his address on it. There were numbers carved in it.

So you met Merrill!

He was amazing. He had an old Willys 4WD station wagon. When it came
time to lift the 6X12 rafters and 12X12 ridgepoles into place, just a
month or two before those photos were taken, Merrill contrived a
bizarre thing out of driftwood and weird old stuff he’d bought at
junkyards. Let’s see. A funky trailer made from an old pickup truck
bed. To that attach a 5-horsepower gasoline engine. To that attach a
winch with a hundred feet of cable. To the funky trailer attach long
beams spliced together by overlapping them and bolting them together,
to make a boom. Attach an old pulley to the top of the boom, and run
the cable through it.

What was required was to drive the thing in low range, first gear, and
never ever turn at all sharply. We’d hoist those big beams up just a
few feet, the rafters, and then drive them around to the side of the
house they belonged to. Then, temporarily brace the boom, and winch
them higher. Higher. Nerve-wracking. Each one weighed hundreds of
pounds. Plus each 6X12 rafter had a very precise “birdsmouth” cut
(Merrill called it) to fit around the 12X12 ridgepole, which was on a
45-degree angle like a diamond. So the rafters were cut to fit around
that corner of the 12X12. Once in place, a few spikes would secure
them long enough for me to climb up on top of the ridge and drill long
holes with a 3/4-inch augur bit eighteen inches long, through both
6X12 rafter and 12X12 ridgepole. Then I would run a long bolt through,
galvanized, which Merrill had picked up at some junkyard, used PG&E bolts I believe, and add a big washer and nut and tighten it all up.

So the framing of the Big House was quite an adventure. 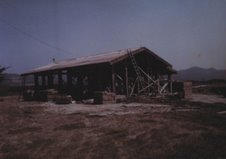