Email John ([email protected]) Hi June,
Recently during one of my coastal expeditions, I decided to carefully check out the former site of the Pescadero Hotel 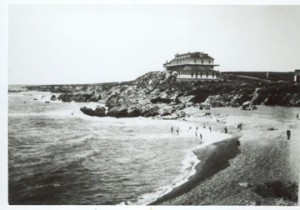 at Pebble Beach, more colorfully known as “Coburn’s Folly.”
I first became aware of the previous existence of this once grand coastside hotel (probably comparable in its time to the present day Ritz Carlton) a couple of years ago when I was reading your book, “The Coburn Mystery.”
I had been directed to your book because of my excitement when I was shown Invisible Beach’s tiny, but amazingly rich with colorful pebbles, gravel bar. This small gravel bar, apparently fed by the same offshore quartz ridge as Pebble Beach, is, in my experience, the best “rockspotting” area on the West Coast. With much anticipation I visited Pebble Beach State Park, the seeming Motherlode of what I was seeing some distance away at Invisible Beach. Hoping to view what had become of this once famous site, I was disappointed to see “The Curse of the Commons,” had essentially destroyed this once unparalleled resource. While the public, after several trials in the late 1800s, had won one of the first beach-access-over-private-property battles on the West Coast, it had been a Pyrrhic victory. Over a hundred years of uncontrolled pebble gathering had reduced the resource to the point that I’ve had loads of river gravel delivered  for my driveway that were more interesting. In fact, if you’re not wearing a Ranger’s uniform you can still see the depletion process continuing as numerous tourists ignore the sign prohibiting collection, and gather up the remaining tiny remnants.         That was one of the reasons I subsequently made up the name Invisible Beach, for the gravel bar’s location. Privacy for the nearby landowners was another reason. And of course my own selfishness, in wanting to keep for myself the non-buoyant marine debris episodically regurgitated along with the pebbles at the gravel bar’s location in a phenomena I call Neptune’s Vomitorium, was of paramount importance.
After viewing the disappointment of the depleted beach that once drew people from around the country (from Shasta to Tia Juana as you quoted) to gather the pretty pebbles, I walked north to where the picture in your book seemed to indicate where Coburn’s Folly had been. To say what I found would never inspire an “Ozymandias,” is a gross understatement. There seemed to be nothing. There was no there, there. Knowing that over 150,000 board feet of lumber, probably the clear heart old growth redwood that present day environmentally insensitive builders lust for, was salvaged from the hotel, and the remnants later burned in a fire, I hadn’t expected much. But, with Highway 1 blasted through the promontory the hotel had sat upon, I couldn’t even find a chunk of concrete or stone that might have been part of the foundation. Oh well, with the thought there’s a lot of other San Mateo history to investigate, I put it out of my mind and moved on to other things.
Recently I returned  to investigate the site again. Armed with a little more information, a lot more curiosity, a smidgen more derring-do, and hoping to find something to write about, I did some more serious looking around. Before I move on to the results of my search, I’d like to quote from Wikipedia to give relevance to the “Ozymandias” reference. The poem, “Ozymandias”, was written by the great poet Percey Shelley and reads:
I met a traveller from an antique landWho said: Two vast and trunkless legs of stoneStand in the desert. Near them on the sand,Half sunk, a shatter’d visage lies, whose frownAnd wrinkled lip and sneer of cold commandTell that its sculptor well those passions readWhich yet survive, stamp’d on these lifeless things,The hand that mock’d them and the heart that fed.And on the pedestal these words appear:“My name is Ozymandias, king of kings:Look on my works, ye Mighty, and despair!”Nothing beside remains: round the decayOf that colossal wreck, boundless and bare,The lone and level sands stretch far away.[1]
” Without directly stating it, Shelley shows that all works of humankind – including power structures and governments – eventually must pass into history, no matter how permanent they may seem at the apex of their influence. Ozymandias’ short-sighted pride seems amusing at first – until the reader realizes that the lessons conveyed are equally applicable today.”
Even Loren Coburn, the contentious, widely-hated millionaire landowner and businessman, when a million wasn’t the price of a ramshackle fixer on a poorly situated lot in El Granada, seems to have gotten some part of Shelley’s message late in his life, if I read your book correctly. Unfortunately, by then his competency, memory, and relationships with the community were beyond salvaging. Of course in a final bit of irony, the “Spanish Lady,” the microscopic, helpless without a host, pandemic Influenza virus of 1918, taught him a related and final lesson of life, as it ended his. But, while I come neither to bury nor praise Loren Coburn, I do want to peck a few lines about my experiences at the site of this essentially lost, (except for your book) but important icon of the San Mateo coast. Enjoy. John
This entry was posted in John Vonderlin, Pebble Beach Hotel. Bookmark the permalink.