On Friday I drove over a hundred miles to visit San Mateo’s most southerly coast. I wanted to investigate whether the beach access/exit of a hundred years ago for the old route around the Waddell Bluffs used Hank Bradley’s jeep road as I had opined previously, or an old road remnant further south.

Using the info from the 1972 picture from the California Coastal Records Project (CCRP) (#7219051) as a guide, I attempted to reach the road, where indicated, just north of the Santa Cruz/San Mateo County border. Yow. No wonder I’d never investigated this area. It’s covered by the most luxuriant growth of poison oak I’ve ever seen on the coast!

Bounded by a hundred foot cliff on the west, I had to attempt to reach where I believed the road to be from the north, south, and east, with no luck.

Finally, I noticed that the poison oak patch thinned out under a Monterey pine tree perched on top of the twenty foot berm to the west of Highway 1. So I crawled on my hands and knees beneath the tree until I reached a heavily brush- covered slope on the west side of the berm. And I promptly fell down it when the branch I was steadying myself on snapped and broke. Only slightly cut and scraped (though it’s amazing how much blood flows out of even small cuts when your heart rate is way up) I picked myself up. There I was, standing on the road remnant.

While the unpaved road was overgrown with brush, the poison oak was thin enough there to allow me to make my way downhill towards where I thought a house had been. Before I got there, the poison oak rallied, blocking my way again.

Daunted, I surrendered, and went back up the unpaved remnant until approaching the top I encountered asphalt remnants of the road perched on the cliff edge. 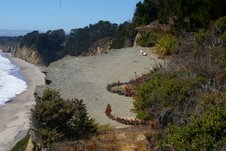 If there was a house here decades ago they enjoyed one of the most spectacular views in San Mateo. But, based on its position, so close to the Waddell Bluffs, I’m quite sure the road was just a driveway and not a remnant from the oldtimer’s bypass.

Satisfied, I headed to the beach to meet Meg and her Beach Watch partner, whom I could see as little dots far to the north from the cliff.

My first act upon reaching the beach was to use handfuls of wet sand to scrub off the sticky sap, loaded with urushiol oil, picked up by brushing by or tumbling through the poison oak. I’m happy to report that, as the experts say, if you can remove the oil within 15 minutes, or so, you shouldn’t suffer an allergic reaction.

I’m also happy to say that my beach hike rewarded me with a couple more unusual sightings and one unique one. I picked up a few of the odd rocks that litter this stretch, the ones that I call, “eyeballs.” 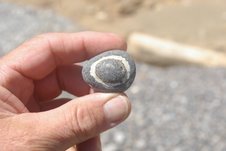 I love to use them in my Marine Debris artplay pieces.

I also collected a few of the green, mossy algae balls I occasionally find. 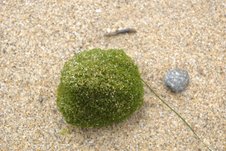 I used to know what the name of these were , but I can’t recall right now. Perhaps, one of your readers can help me with this, as they did when they previously identified the clump of clear, sausage like things I found at Invisible Beach as “squid egg cases.”

Lastly, and most unusual for me, Meg and her friend identified the large, dead marine mammal I’d seen from the clifftop, not as an immature Elephant Seal, but rather an immature, male “Steller Sea Lion.” 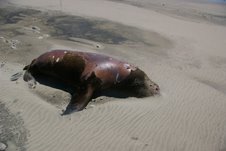 They are often called Stellar Sea Lions, probably because of the word stellar, but were actually named after naturalist Georg Steller, who first observed them in 1741.

These endangered pinnipeds southern range ends at Ano Nuevo these days because of the mysterious, but possibly catastrophic decline in their numbers in the last few decades, making finding their carcasses on our beaches a rare thing. That’s probably why this is the first photo of one I have in my “ISeeDeadThings” file.

I’ve attached a photo of Hank Bradley’s Jeep road I took from the beach. As you can see by the large trees on its edge it has the look of a road that has been there a long time. 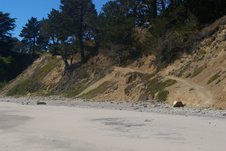 Finally, although I originally named this place “Eyeball Beach”, for obvious reasons, I now call it Bradley Beach because the Ano Nuevo rangers and “Beach Watch” folks use that moniker but I noticed somebody added “Boot Rock Beach” to the CCRP captions recently. Apparently there are lots of names for this place. Complicating matters further is Patricia Page’s book, “Shadows on a Nameless Beach,” 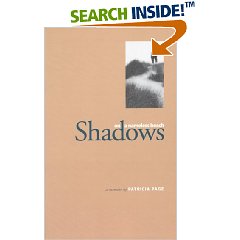 The beach may not be name-less at all, but a beach with the MOST names on the remote South Coast. Perhaps, that’s a fitting circumstance for this rugged gateway to San Mateo’s spectacular coastline to the north. Enjoy. John.