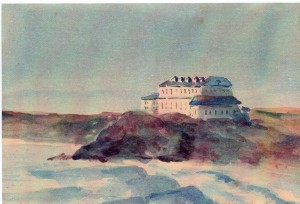 (Watercolor of Pebble Beach Hotel believed to be by Coastside artist Galen Wolf.)

It has been a while, but I’d like to return to detailing the results of my search of the site of where “Coburn’s Folly,” Loren Coburn’s, never-opened three story hotel, used to be, perched on a promontory above the famous Pebble Beach of Pescadero. As I related in Part 1, there was “no there”, there, as far as finding remnants of the hotel’s existence. I did find one sliver of brick, but it was obviously too modern to have been from a century ago..

Amongst the numerous chunks of broken glass I collected from beneath bushes or under boulder’s shoulders, most were from modern pint bottles of hard liquor. But, my interest was piqued when I found this remnant of a brown Clorox bottle. 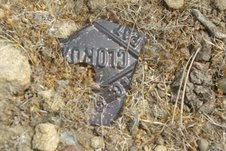 Remembering them from my childhood, I websearched and found out this kind of bottle was discontinued in the early 1960s. While there are collectors who might have identified the bottle’s age more accurately if the bottle had been whole, such was not the case.

Curious of what the few guests Loren ever allowed to stay at the hotel might have viewed from the veranda I climbed up the rocky promontory just west of Highway 1. As I scrambled up the last part of a steep gully and launched myself on to the top, I realized I had stumbled into a solid patch of poison oak. Like I’d stepped over a log and heard the angry warning of a disturbed rattler, I made a panicky retreat, leaving one of my shoes behind. 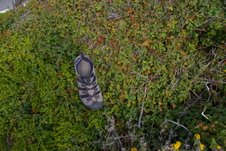 Gingerly reclaiming it, I made a tactical withdrawal and hiked south to where a vague path with much less poison oak led up to the ridgetop. Here is what a visitor would have seen a hundred years ago as they looked out on the ocean from the veranda of Coburn’s “White Elephant,” as some Pescaderans called it. 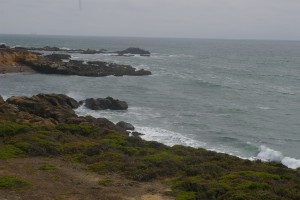 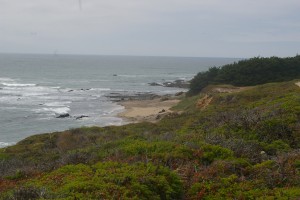 Satisfied there really wasn’t much more to see, I was headed back to my car when I saw an unusual colored rock, at least for that area, under the overhang of a boulder. 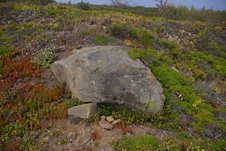 Picking it up I was surprised to find it was a “faux” rock, apparently made of fiberglass. Inside its hollow shell was a small bottle inserted into a small ring cast into the “rock.” 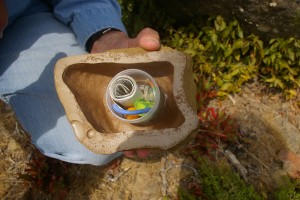 I realized it was a geocache and curiously opened the bottle. It contained a few little mementos, and a rolled up set of papers with over one hundred names on it of the people who had located the geocache and when they had done so. 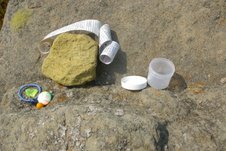 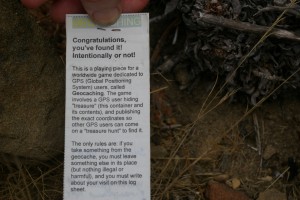 How cool. Though I’ve had two GPS devices I rarely have need to use them and am not a geocacher.

However, with a little websearching, using “Coburn’s Folly and geocache” as the search term, I quickly found the specific geocache site this was. The URL is: geocaching.com.

This entry was posted in John Vonderlin, Pebble Beach Hotel. Bookmark the permalink.