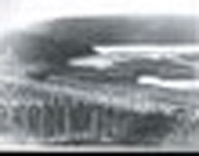 (Yes, this photo is blurry.)

Hi June,“If you look closely at the photo you can see Lake Lucerne above and behind the carriage on the bridge. You can also see the low dam, equipped with floodgates, that was built by Loren Coburn to create the lake.”

As I noted in the first two parts in this posting about Coburn’s Folly, seemingly all signs of the previous existence of a grand hotel that had been perched above the once nationally famous Pebble Beach, are now gone. But, while the hotel and livery are entirely gone, there still remains a huge memorial to Loren Coburn’s dream to create a seaside resort that would rival the famous Del Monte Hotel at the other Pebble Beach in Monterey. I discovered that while reading your book, “The Coburn Mystery.”
On Page 97, The Pebble Beach Hotel chapter begins:
“Coburn’s “modern caravansary”, the Pebble Beach Hotel, had not opened its doors. Out of spite, Loren vowed he would not open the hotel until the “foolish” Pescaderans came to their senses. Estimated to cost one hundred and fifty thousand dollars, the empty three-story, hotel, with a wide veranda stretching around it, was dubbed, “The White Elephant” and “Coburn’s Folly”. The villagers sneered that nobody could live in Coburn’s hotel, even if it were opened in the grandest style.
A San Francisco reporter wrote an unflattering portrait of the empty hotel as a home of rats, a place nobody would visit. In the daytime it was eery to walk through the echoing chambers and corridors. Outside the wind howled and the waves crashed. The wind sailing through the top floor sounded ghostly, especially when mixed with the sounds of the bats and owls that lived there.
Numerous windows on the ocean side had been broken by birds flying through them. Some windows had been boarded, but still the wind swept through the hallways stirring up tiny tornadoes of dust.
Loren feared the villagers might seek revenge by destroying the hotel, and he hired a watchman named Patrick Regan to protect the building from being set on fire. Regan who roomed in the stables, patrolled the building at night.
The bad press cast a dark shadow over the big empty hotel. Another story said the hotel was the only building for over a mile, and the beach nearby was bleak; barren rocks lined the shore. The hills to the east were described as wild and desolate. There was nothing inviting about the Pebble Beach Hotel that would compare with the Del Monte.
On the contrary, soothsayers predicted a “sure death” for those brave enough to wade in the ocean in front of the hotel. If not death by drowning, then serious injuries could be sustained from the jagged rocks and the untamed surf that crashed on the sandy shore.
But Loren was resilient. He was proud of the gleaming white Pebble Beach Hotel. The rooms were well-lit and good-sized; there was hot and cold running water. He continued was his plans for a resort. A race track was laid out. A large pavilion was planned. He built a dam across a creek a mile from the hotel so his future guests would have the advantage of sea bathing. When the tide flowed in the floodgates would close, forming beautiful little Lake Lucerne.”
Well how about that? Little Lake Lucerne, a body of water I’ve driven by many times, wishing I could kayak on it, but not willing to violate the “No Trespassing” signs, is apparently the only lasting  memorial to Loren Coburn’s dreams. While the “Spanish Lady” as some called the Influenza Epidemic of 1918 and 19, ended his life, and the building of Highway 1 removed the last vestiges of his grand hotel, the little lake remains much as it was over a century ago.
While I was waiting for some free time to go out and look at and photograph the area with the “new eyes” this knowledge afforded me, I came across an historical photo that showed a carriage passing over the “Bean Hollow Bridge,” sometime in the 1890s or early 1900s.  The photograph is apparently from the Ruth Louise Steele Collection which is archived with the Pescadero Historical Society. I’ll try to see if I can get a clear copy of it rather then this thrice removed version. But to me the new knowledge that it had existed gave me an exciting epiphany, that must be what that odd lot of stumps in the water and marshland between Bean Hollow Road and Highway 1 are.
In Part 4 of this posting I’d like to relate my little adventure and share some pictures I took of these historical remnants. Enjoy. John
This entry was posted in Uncategorized. Bookmark the permalink.