Last weekend Meg, I, and a handful of other people met Mike Merritt

the Interpretive Ranger for Butano State Park, at the corner of Cloverdale Road and Gazos Creek Road for a tour he was offering of the historic sites of Gazos Canyon. After chatting for a while to gather any latecomers, we proceeded up Gazos Road into the canyon.

Our first stop was the former site of the historic Gazos Lumber Mill. Here Mike introduced us to a subject he obviously knows really well, the history of the Gazos Canyon. He had a portfolio of large historic photos that showed the site a hundred years ago. While this was the area in which I’d found the pre-Prohibition beer bottle I’d mentioned in a previous posting, I was amazed at what I’d not seen. He’d hold up a photograph shot from where we stood, demonstrating what it looked like a hundred years ago, and at first blush it was unrecognizable. Only as he would point out various long-lasting landmarks could I make the connection.

I must say the last hundred years have been kind to the canyon, allowing it to recover from the clearcutting get-it-while-you-can lumber practices practiced way back when.

My fellow tourists were an interesting, intelligent and curious group. Several of them had just come from a tour of the Pie Ranch property, sponsored by the Pescadero History Association (just across the road from where Russell Towle, Stuart Harwood and the rest of that colorful group of folks used to exit their Ano Nuevo artist commune onto Highway 1.)

When Mike asked us if we knew what Gazos meant, I think I was the only one who didn’t know it was Spanish for Heron. They were also fans of Harvey Mowry. I know that because when Mike mentioned him and his book, “Echoes of the Gazos Creek Country,” not only was there a chorus of recognition, but one person pulled out a photocopy of the funky, but serviceable, hand-drawn maps of mill sites Harvey sprinkles throughout his book. Various members, obviously amateur naturalists, chimed in with plant and butterfly identifications as we hiked along.

As Mike filled in the details about this site, I splashed through the creek to take some photos of the mill pond dam. 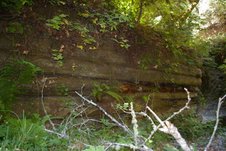 This wooden dam, composed of large trees laid atop each other across the creek, is still essentially intact a hundred years later. Rangers have cut through part of it to improve stream flow for fish and to minimize the chance of a logjam forming, but it still looks almost serviceable.

From there we moved up the creek, with Mike pointing out the subtle remnants of what used to be here and there. Things I’d have never noticed without a lot of searching. There was the short stretch of shallow ditch alongside the creek that was probably the remnant of the wooden flume built in 1870-1871 to float the cut lumber down the canyon. The cut tree roots along its side were strong evidence it was not a natural feature. Harvey’s book describes the flume as half a square, turned on edge with the top 40 inches wide. It had a slant of an inch and a half every sixteen feet and was five -and -a- half miles long. From there it was shipped by rail or wagon to Pigeon Point where it was loaded by aerial cable onto awaiting ships.

At one point he pointed out five feet of tiny rail that stuck out of the gravel in the creek. 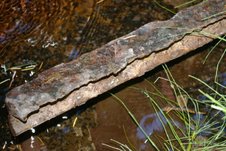 This is apparently the only remnant of the tramway that was built atop the mill’s deck. Two hundred and fifty feet long it allowed the cut lumber to be easily moved about to the various stacks it was put in before shipping or floating downstream. I’m eager to see that piece of history, about 130 years old, be rescued and preserved for future visitors.

Nearby, in a spot the creek had scoured the sand and gravel away from the bedrock, were four large, deep, strangely round holes. 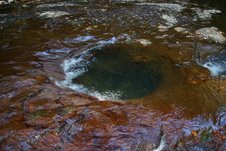 Their shape and positioning shouted a manmade origin. Mike’s theory, is they were acorn soaking holes. During the summer or fall when the creek’s flow was gentle, net bags full of acorns could be suspended in them. This would have allowed some of the tannic acid they contain to be removed before they were ground into the flour that was an important part of the local tribe’s diet.

So it went. Just as Harvey mentions in his book when he describes his 1972 return visit to his childhood haunts, most everything is gone or covered by a thick layer of forest duff. But Mike, a student of the history of the area was able to point out things like springboard cuts in various giant stumps. (018) 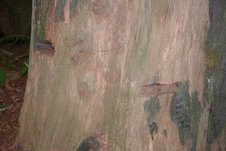 By jamming springboards into the cuts, loggers were able to stand atop them and make cuts higher up the trees where the wood was softer and had a straighter grain. Or the grooves in other stumps that were used to guide the cables as the donkey engine snaked giant logs downhill towards the mill. Or tiny flat spots on the steep slopes above the creek where housing for the workers or their families had been perched.

While the forest has regrown and once again shade and quiet reign supreme in this deep dark canyon, for a few hours the noise, danger, and industry of these pioneers as they wrested a living from the giant trees that grew here a hundred years ago came alive in our imaginations. I give the tour two thumbs up and recommend you keep an eye open for the next time Mike gives it.

When towards the end of our hike we re-entered the creekbed, I photographed this brick remnant sticking out of the gravel. 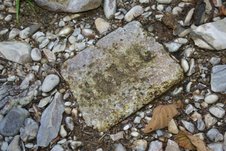 Since then I’ve located the website for the “International Brick Collectors Association.” Five hundred of these enthusiasts recently met in San Francisco to trade, sell, or just share their passion about all things brick. The website encourages questions, so I’m hoping with a reply to my email to soon know the answer to where the “? BALL” brick company was. The website lists dozens of antique brick producers from throughout California, but none seem to apply.

Just before we left the creek and headed back to our cars, I wandered around a corner from the group. and scared up a Great Gray Heron from its pursuit of small fish in the deep pools. A fitting bit of symbolism of nature’s resiliency and a reassuring token of this area’s totem returning to its rightful domain. Enjoy. John

P.S. The discussion about the brick elicited Meg’s memory from a decade ago of entering Apple Jack’s one day with her husband and being approached by a man who asked them if they had any bricks. It turns out this was the famous Hubert “Limey” Kay, another of La Honda’s seemingly endless group of colorful characters. I did a websearch of “La Honda and bricks” and up popped his obituary. You can read about this unusual man and his colorful life in a Half Moon Bay Review article here:
www.hmbreview.com/articles/2008/07/30/news/doc4890cf2ab86eb690731841.txt

or go on an online photo tour of his house, which is now available for rent. For more info, please click here: