A Gumboot, a Pectoral Girdle & Snotsicles….New Story by John Vonderlin

A Gumboot, a Pectoral Girdle and Snotsicles

My last trip to Invisible Beach didn’t fail to amaze, mystify and amuse me with oddities and superlatives as usual.

The first treasure spotted was the largest and freshest Gumboot Chiton I’ve ever seen washed ashore.

This lovely brute, the largest of the numerous chiton species, measured nearly twelve inches end- to- end, close to the listed max of 13 or 14, you’ll find in books. What made it particularly special was that it still had its gills, those brown tentacle-like things arranged in curves on either side of the large central foot. I’d never seen these in such good shape before, in the hundreds of chitons I’ve seen washed ashore through the years.

In this enlarged picture of its mouth you can clearly see its radula, the mouth-part it uses to scrape its food, various algaes, off the reef.

Here’s an excerpt from “Gumboot Chiton Wikipedia” that explains the origins of this strange creature’s names. By the way, “Gumby” or should it be “Gumbo?,” is presently immersed in a sloppy mix of water and soil in a bucket, so that I can eventually remove the giant butterfly-shaped valves or plates, for artistic use, after it decomposes.

The name, “gumboot chiton,” seems to derive from a resemblance to part of a rubber Wellington boot or “gum rubber” boot. These boots were previously known as gumboots. However, support for this apparent etymology is scanty; the Giant Pacific Gumboot Chiton Homepage states “it has reminded others of the sole of a gum rubber boot”, and an Alaskan seashore field guide says it is named “from the animal’s resemblance to the rubber, or gum, boots worn by Alaska’s coastal residents.”

Neptune’s Vomitorium, had coughed up the next beach oddity, this strange piece of cartilage. 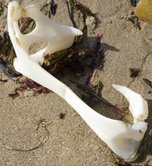 I’d seen smaller, partial versions of similar-shaped chunks previously, one still connected to the recognizable parts of a ray, so I was pretty sure I knew what it came from. After a little websearching I discovered it is called a pectoral girdle. Rays, sharks, fish, even people have them, though the fish’s and ours are composed of bones not cartilage. It provides a strong, stable foundation to anchor fins and arms onto, so they can do their vital work. My belief is this must be from a quite large ray.

There were also several unusual types of algae in the wrack that had washed up at Invisible Beach, and despite hours of research, I’m still trying to identify them.

I was, however, able to find the answer to what that strange hole was in the Sea Star photo I sent you last time. I found the Sea Star under a foot of water right next to a golf ball. There was a perfectly round hole in it, perhaps as much as a half an inch wide. 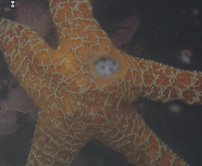 .It turns out that this hole, that I think I’ve seen before, but can’t clearly remember when, is something that all Sea Stars have. It’s called a “madreporite.” (Mother of all holes?) It’s tightly closed in Sea Stars washed up on the beach, or clinging to the rocks when the tide recedes, so it’s not often seen.

Wikipedia explains it as:  “The madreporite is an opening used to filter water into the water vascular system of echinoderms. It is visible as a small red or yellow button-like structure, looking like a small wart, on the aboral surface of the central disk of a starfish.”

On the same day, at a nearby beach, I saw several other oddities I’d like to share. There had been a mass stranding of almost fifty large Moon Jellyfish. They were in really good shape.

You can tell the two in the picture are both male by the fact that the horseshoe-shaped gonads visible through their translucent flesh are purplish. Females’ are white or yellowish. The strange coincidence of them being side by side on a spacious beach is due to the fact that Moon Jellyfish, or Aurelia aurita, as they are officially known, are unique amongst the large medusa species because they don’t capture prey with their tentacles. Instead they trap zooplankton in the mucus coating the outer surface of their bell and their oral arms. That old song lyric by Mary Wells, “I’m stuck like glue to my guy,” might be relevant in this case.

Nearby another oddity lay exposed in a sandy cliff above the normal reach of the waves. A number of iron-oxide-stained, stalactite-like features hung down from the eroded cliffside. 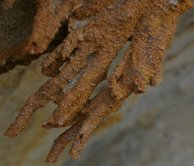 After an examination I believe I know what they are. They are the early stage of concretions that form around roots or twigs. While they were still buried, iron-containing materials had accreted around them. If the roots had stayed buried and calcium-rich water had percolated through the sand, I believe the cementation process that creates concretions would have happened.

Not far away, flowing over a low seaside cliff into the sand, was a another oddity that doesn’t have a name that I can be sure of. Upon seeing the photo, my brother insisted it was either a snotsicle or snottite.

He’d watched a show on spelunking recently and both snotsicle and snottite were mentioned. Unfortunately, the word snotsicle is also commonly used to denote the frozen result of a runny nose. On the other hand snottite only occurs in caves, so neither name is quite right.

A Wikipedia article, besides pictures, had this excerpt about snottite:

“Snottites are colonies of single-celled extremophilic bacteria. They hang from the walls and ceilings of caves and are similar to small stalactites, but have the consistency of ‘snot’, or mucus.

“The bacteria derive their energy from chemosynthesis of volcanic sulfur compounds and warm-water solution dripping down from above. Because of this, they are highly acidic, some with the corrosive properties of battery acid.”

As I said in the beginning of this posting, a trip to the San Mateo coast almost always provides me with a sense of awe, mystery and amusement at what Neptune and Mother Nature have to offer. I wonder what this week will manifest? Enjoy. John