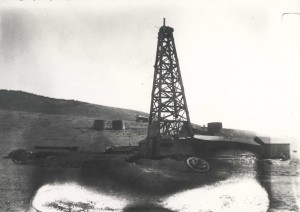 Wes Dognetti surveys the gentle coastal hills west of La Honda and gazes serenely at the Pacific below.

“I’m told that close to a million barrels have been taken from these fields since oil was discovered here (in the mid 1800s) . And there’s probably a lot more down there.”

Dognetti should know. For the past 20 years he’s worked as La Honda superintendent for a variety of firms, including the ZIA Petroleum Corp, the newest in a line of independent companies that hope enough oil remains in the overworked fields for them to cash in on the skyrocketing price of oil.

ZIA’s president, William Weaver, Jr. of Long Beach, is among a number of south state entrepreneurs traveling north to seek their fortunes in the precious black crude.

While the so-called “majors” of the petroleum industry are reviewing potentially rich deposits off the Northern California shoreline, smaller oil firms such as ZIA are taking a closer look at abandoned wells in the coastal hills of San Mateo and Santa Clara counties.

So far, ZIA likes what it sees.

The company is now pumping an average of 100 barrels of crude daily.

In the next few years, ZIA hopes to have 21 additional wells in operation, pumping a total of 2,000 barrels per day.

At the current price of almost $12 a barrel, ZIA is happily staring at a potential yearly gross of $8.6 million.

Weaver got a taste of good fortune in his new enterprise earlier this month.

The 44-year-old ZIA president contacted the San Mateo County Planning Department on a recent Thursday to inquire about oil exploration permits near the South Coast.

He was advised permits would run $200 per well, but on the following Monday would increase to $2,000–the hefty hike a direct result of the property tax restrictions imposed by Proposition 13.

Weaver hastily boarded a plane on Friday morning to fly north. He issued the planning office a check for $4,200 plus another $350 in other environmental fees for 21 oil drilling applications.

Had Weaver waited one more day to make his inquiry, he would have been required to pay the county a total of $45,550 for the same number of applications.

Weaver can only hope that the almost miraculous paper savings of more than $40,000 is a signal of the financial prosperity that awaits his three-year-old enterprise.

The county has never earned the distinction of contributing mightily to the national petroleum reserve. In fact, it seems safe to assume few are aware oil is pumped from the ground of this predominantly suburban region.

But according to Weaver, a professional engineer and businessman who says he has researched the oil drilling history of Northern California, the coastal hills of San Mateo and Santa Clara counties were among the first areas of the state to be tapped for commercial oil production.

It was in the year 1865, says Weaver, that a San Francisco druggist Charles Morrell, was tipped by the rugged timbermen of the era that crude oil was actually bubbling from the ground on the grassy slopes near La Honda and Half Moon Bay and south into Santa Clara.

Weaver relates that the intrepid druggist laid claim to this land, ladled the crude from man-made sumps and marketed the liquid as illuminates for lamps.

Petroleum giants such as Exxon, Texaco and Union purchased mineral rights to the land in the mid 1950s and established more modern, gas-operated commercial pumps on land that is now part of the Cowell Ranch south of Purisima, the Amburst and Savage land, and the Peter Folger property off San Gregorio Road, about 2 1/2 miles west of La Honda.

What attracted the majors to the area, according to Weaver, was the relatively shallow depths of the deposits, and the “low gravity” content of the oil, which eased refining the crude into gasoline.

In some sections the sticky crude was found within 15 feet of ground level, but in most areas oil was hit after drilling 1,600 feet to 2,400 feet.

These depths are considered by oilmen to be extremely shallow. By comparison, most Texas wells are sunk 10,000 feet and more.

But the shallow wells, however convenient, didn’t produce what was hoped for by the majors. The wells yielded far less than newly discovered deposits in the southern states and overseas.

“The majors just couldn’t show a reasonable profit with their La Honda wells at the price,” he notes.

Weaver’s ZIA Corp purchased Neaves mineral rights to the scenic coastal slopes in 1975. With these rights was an agreement that that the owners of the land that contained the oil would be guaranteed a percentage of the gross production.

Twelve gas-operated iron pumps, unseen from the La Honda Road, and nestled in the hills among patches of wild thistle, operate 24 hours a day.

In what is locally referred to as the Lower La Honda Field just north of the roadway, a barb-wire fenced compound contains a cluster of storage tanks and machinery.

There water and gas is separated from the oil pumped from the ground and stored.

The gas is used to operate the pumps, water is injected back into the earth and the oil is transported from the field tanks to a large tank closer to the road.

ZIA Oil is sold to Union, which in turn sells it to the Shell Oil Refinery in Martinez.

“What we’ve done (in purchasing these leases),” comments Weaver, is to turn heretofore marginally profitable wells into ones that are quite profitable.

“One has to remember that we (oilmen) are now getting five times as much for oil than was given six or seven years ago,” adds Weaver, who reminds how the Arab oil embargo dramatically boosted the price of a barrel of crude.

Weaver further advises that the market now for crude oil is far greater in Northern California than in the south–the major transfer point for Alaskan tankers.

ZIA has attempted to keep a low profile, skirting any publicty for fear of hassles from environmentalists and vandals.

Weverr employs Dognetti–an old time oilman–schooled not in high finance, but in the muck, the ditches and the heat of the Casmalia oil fields near Vandenburg–to guard and maintain the facilities.

But Weaver claims his operation is ecologically sound, and reminds that in the long run his business can add much needed revenue to local government coffers. He must pay a mineral tax based on production.