Hi June,
I mentioned, a few postings back, that after having had the chance to read Dr. Alan K. Brown’s (circa 1960s) book, “Place Names of San Mateo County,” gave me a passel of new (yet very old) places to research, hunt for, explore, photograph and write about. Now I’ve found a place name I think you’ll find particularly interesting, given you wrote the definitive book on Loren Coburn. Dr. Brown’s book is available for purchase at the San Mateo County History Museum in Redwood City.
You’ll recall, in a series of my postings about trying to find any remains of Loren “Coburn’s Folly”, I lifted a few 19th century quotes about the expensive “white elephant” hotel from your book, “The Coburn Mystery.”  One San Francisco reporter guaranteed visitors foolish enough to enter the treacherous waters near Pebble Beach almost certain death, or at least serious injury, from being battered on the sharp, pointy rocks near Loren’s unpopular hotel.

For me, Dr. Brown’s magic word was “Bathhouse Rock,” and simply stated it is: “The large rock just off Pescadero Point, Coast Highway, 1.4 miles south of the Pescadero Junction. Evidently one of the Pebble Beach Hotel bathhouses was here in the 1890s.”  Well,  the name and description of “Bathhouse Rock” may have been one short entry in Dr. Brown’s book but it got me to return to Pescadero Point, one of my favorite places on the South Coast. I wanted to try to envision what had actually been going on there over a hundred years ago.

I first thought that there weren’t any rocks offshore of Pescadero Point, at least, not one that I would have perched a bathhouse on. The possibility of being swept away by a rogue wave while lounging in a bathtub, no matter how spectacular a view you were enjoying, would have justified the negative review by the 19th century San Francisco reporter But my recent return visit to the area leads me to believe Dr. Brown got it right. That means the reporter was probably doing nothing more then relaying the distortions Pescaderans were telling him because of their abiding anger at Loren Coburn and the lengthy “Pebble Beach War.” My visit also offered a bit of support to Mr. Coburn’s dream of building a resort that could compete with the luxurious Del Monte Hotel in Monterey County.
I’ve written about Pescadero Point many times. It was the spot where a large blue whale carcass washed ashore on September 6, 1979. The 86 foot female’s skeleton was recovered and is now displayed at the Long Marine Lab (Seymour Marine Discovery Center)in Santa Cruz. 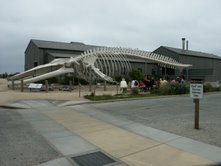 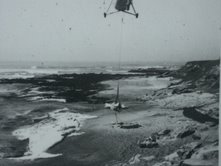 It is said to be the largest on display in the world. I also wrote about and shared some photographs of the numerous “tafoni” and scattering of concretions found on Pescadero Point.. 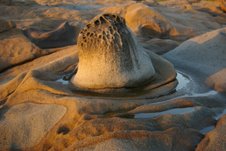 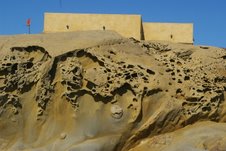 Once I arrived on the South Coast, I photographed the only large rock just offshore of the Point that I remembered and immediately dismissed it as the former site of the bathhouse.. Perching a bathhouse on this rock, one that is inaccessible at high tide, and often overwashed by large waves, was not something the clever, but irascible Mr. Coburn would have countenanced. 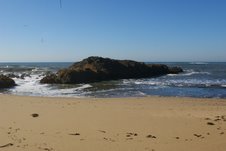 Scrambling over the rocky Point I had a sudden epiphany.

The rock Dr. Brown referred to in his place names book was the whole Point, which is separated in large part by a long, shallow, water-filled depression connected to the ocean only at high tide. 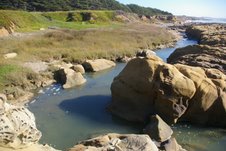 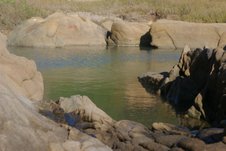 Surveying the scene I came to believe that this was the site of one of Coburn’s bathhouses. And an impressive site it was. Not only is the Point composed and covered with all sorts of geologic oddities; 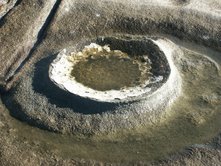 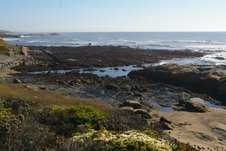 it protects the large, shallow, wading pool behind it from the surf.  Above the pool there’s a spacious, flat shelf, that is relatively well-protected from the wind. It would have been a perfect place for Loren Coburn’s Pebble Beach hotel guests to set up a sun umbrella and enjoy a picnic lunch, while keeping a close eye on the kids as they splashed or swam in the natural pool or checked out the nearby tidepools.

Furthermore, when scrambling over the Point’s rocks to the north you come upon Fiddler’s Cove, a long, sandy stretch of beach, protected from rogue waves by a wide, flat reef barely under water except at low tide. It’s here that I like to launch my kayak. Not only is the bottom sandy right next to the Point, but by staying in the wave-shadow of the large offshore rock, I can shorten the distance I’m exposed to large waves as I make a mad dash-paddle to the calmer waters further offshore.

As you climb over the Point’s rock, you’ll find several fairly deep, large bathtub-sized holes in the rock, holes that are usually filled with water from the high tide’s surf.

Warmed by the sun they provide a comfortable soak, with a spectacular view, if you’re willing to share your bath with a small crab or two.

If you want to visit this area, and judge for yourself whether “Coburn’s Folly” got a fair shake from some city slicker hack a hundred years ago, I’d recommend you check the California Coastal Records Project website and look at the Pescadero Point picture (click here and those surrounding it. You’ll find there are few spots as easily accessible along the San Mateo Coast, that have as many unusual, interesting, and enjoyable things to see in such close proximity,  as this relatively, infrequently visited stretch of the coast. Enjoy. John
This entry was posted in Bathhouse Rock, John Vonderlin. Bookmark the permalink.