In an earlier post, I put up a still photo called “The Forest,” an image originally taken from a flip video. Here it is: 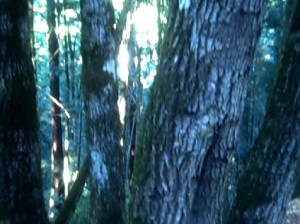 A few weeks ago my longtime partner Burt’s cousins were here from the East Coast and Colorado. I wanted to show them my beautiful Coastside—especially after they had visited Muir Woods in Marin County. I told them we had our own forest and it was unlike any other they had ever seen. I took them down Tunitas Creek Road. At one point we got out of the car and I played with the flip, shot some moving pictures.

And then I sent “The Forest” image to John…..and he mystified then frustrated me by commenting that he saw a little man’s head in the pix. I could not see it. I couldn’t see it for the longest time because I was looking for Burt’s head, or a head belonging to one of the cousins…..

Hi June,
Could you send the Flip photo of the woods I saw the man’s head in to me and I’ll frame, accentuate etc. it  for you? It was just a small bit of pareidolia, something I see a lot of because of my collecting habits. When I first started showing Meg some of my pareidolic stuff she soon found the rock I’ve attached a picture of 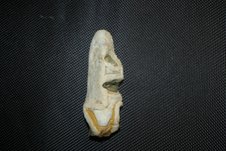 and gifted it to me. It’s a simple profile, but reminds me of the little Tiki Gods that were popular in Hawaii when I was a kid. The “head” in the photo was a similar profile.

When we were kids we could lay on our backs and see pictures in the clouds. Or monsters created by hanging clothes in our closets in a darkened room. Thank God pulling the covers over our head protected me from the latter. We tend to lose that “skill” as the world’s adult worries gather on our ever more stooping shoulders. I suppose my fascination with pareidolia may be an attempt to “recapture the inner child” as the book promoted some time ago.

However, the ability to see the predator hiding in the woods or bushes from limited stimuli is probably a hardwired survival trait. Once we became a weaponized species our fellow man was probably the most common of the dangerous predators hiding in wait. This, and our narcissism, may explain the majority of pareidolic topographical features being related to humans.

While writing a story on the evolutionary significance of pareidolia I came on a scientific paper that theorized the young infant’s ability to recognize its mother or other parental figures’ facial features very early on, and respond favorably, was important in creating the bond necessary for a species that has such a long period of vulnerability. Whatever the truth it gives me one more form of amusement and another group of things to look for. Enjoy. John
——-
Email John Vonderlin ([email protected])