With my brother visiting from Oregon, I used the opportunity to come out to San Mateo’s beautiful coast and do some collecting of Marine Debris at Invisible Beach and below the Ritz Carlton a few days ago.

It had been a while since I’d been to the latter, and I wanted to clean the reef of golf balls before the big Samsung Golf Tournament that started yesterday. There were only a few more visitors then normal, but the place was a beehive of activity. Big tents raised along the hotel’s southern side, Samsung signs everywhere, huge light pole trucks waiting to be positioned, workers buzzing around everywhere on electric carts, talking earnestly on their cell phones. Things are really coming together for their moment in the sun, or at least the Golf Channel. The nearly unique-in-golf-tournament-history twenty-six minute fog delay the competitors experienced yesterday, certainly put a Northern California coastal imprint on that moment in the sun.Wearing my kayak booties I was able to splash around the rock promontory that isolates the beach below the Ritz except at low tide and had the Sunken Cathedral Beach to myself. The Sunken Cathedral’s ruins seemed a little more eroded from its cliffside grave then the last time I saw it, but still looks like it has a few more good years in it. 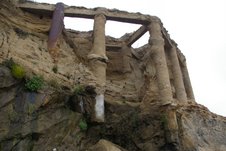 I took some obligatory pictures of it with my camera, trying a few different angles from those previously tried. I was hoping to luck out and capture the somber, brooding aspect of this monument to some developer’s cleverness. I also shot a little video of it with my new, cool Flip Video, which I’ll send in a subsequent email. I obviously need some more practice with it, but so do the golfers whose errant balls I began to collect as I started northward.

I ended up gathering 59 balls. 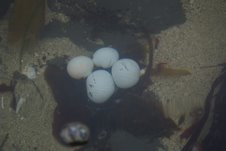 But, probably got only part of those that were there, as there was a lot of seaweed filling the holes in the reef where they often gather. I tried to locate them in their hiding places, but feeling around with my feet in the slippery mess for hidden balls seemed like a prescription for a broken ankle or a concussion. Note from the pictures I attached that the balls are social sea creatures. They love to congregate. While five in one place was the maximum this time, if I remember rightly, I found as many as 46 in one hole last year. It was of interest that of the 59 I gathered, only one was not complete and that most were fairly new, hardly smoothed by their time in the surf. This is very unlike those that are regurgitated by Neptune’s Vomitorium, 15 miles south and perhaps many months or years into their travels.

The last two pictures are of an odd congregation of marine debris I spotted south of the Sunken Cathedral as we were leaving.

On first sight I thought I was looking at Cinderella’s glass slipper, three complete golf balls and the pink core of another. When I picked up the small, round, spongy, pink thing and examined it carefully 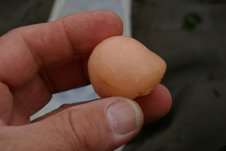 I realized that it was the severed “head” of a personal item. While I was glad to add it to my collection of adult-themed marine debris items, it made me doubt that Cinderella had anything to do with the “glass slipper.” Or maybe Walt Disney left that part of the story out.

My trip to Invisible Beach that day produced a bonanza of oddities or superlatives I’d like to share in my next posting. Enjoy. John

This entry was posted in Russell Towle, Uncategorized. Bookmark the permalink.