W.J. Savage & the Giant Trees of the South Coast 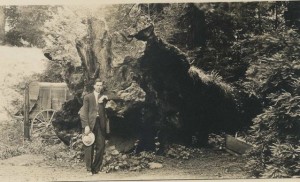 (Image: Mr. Dunn, the editor of the Coastside Comet poses beside a felled tree.]

Woodman, spare that tree!
Touch not a single bough!
In youth it sheltered me,
And I’ll protect it now.
—George Pope Morris (1830)

In 1913, the differences between the two men centered on a small grove of giant redwood trees located in the Coastside’s remote Lynch’s Gulch in Lobitos Canyon, south of Half Moon Bay.

Growing up, Savage watched trees felled in the more easily accessible Coastside canyons. Lynch’s Gulch could only be reached on foot, and Savage was convinced those redwoods would remain untouched by the logger’s saw.

But he was wrong. Savage soon learned the trees were threatened and that John Dudfield’s lumber company had begun the largest logging effort ever in order to clear Lobitos Canyon.

When Savage was a small boy in the early 1870s, his father often brought him to visit the redwoods in Lynch’s Gulch, which was named for an Irishman Paddy Lynch, and his kindly wife who resided among the redwoods between Purissima and Tunitas canyons.

W.J. Savage’s father, according to my research, was probably R.W. Savage, owner of the San Gregorio House in 1872.

The elder Savage described his San Gregorio House, a first-class site for trout fishermen as “one of the most homelike and and beautiful places in California.”

The hotel stood on the San Mateo County Coastside, 44 1/2 miles south of San Francisco via the San Mateo and Pescadero stage. Mr. Savage always kept a team of horses at the ready to take guests to “bathe” in the salty ocean half a miles away.

But San Gregorio was simply a tiny farming community that could not compete as a resort with, for example, Mrs. Swanton’s well known Pescadero hotel, not far from the famous pebble covered beach that drew tourists from near and far.

On the frequent trips to Lynch’s Gulch, R.W. Savage brought young W.J. along. He watched while his father purchased stakes, posts and pickets from “One-Eyed Sam” and “Big Bill.”

These woodsmen–colorful alumni of the Coatside’s early logging days–shared a picturesque cabin in the redwoods, and they exposed the impressionable lad to the magical lore of the forest. The little boy came to believe in the existence of “Wild Rose Ann,” a nuturing, protective spirit whose mythological powers extended deep into the shade of the big trees.

W.J. Savage recalled that the land embracing Lynch’s Gulch had been owned by Major McCoy, who in an attempt to preserve the trees–some more than 10 feet in diameter–sold pieces of the forest to many individual owners. McCoy believed that by diluting the decision process, the redwoods would remain undisturbed.

“One Eyed Sam” and “Big Bill” also spun stories of the energetic German, Henry Dobbel, dubbed “the prince of Purissima” –a once-thriving farming community and rival of nearby Half Moon Bay. Dobbel was the driving force behind Purissima, a promising hamlet at the crossroads which boasted a schoolhouse, general store, post office and stage stop until a potato blight turned Purissima into a ghost town.

Savage was about the same age as Redwood City’s Tacoma Mill Company executive, John Dudfield, who wed Lillian Jury in 1897. Shortly after the wedding, Dudfield established his own lumber company, headquartered in Palo Alto. Forecasting a great demand for lumber following the 1906 San Francisco Earthquake & Fire, Dudfield searched for dependabe sources of wood, according to author Frank Stanger’s “Sawmills in the Redwoods,” available at the San Mateo County History Museum in Redwood City. [The book was out-of-print when, some years ago, South Coastsider Ken Fisher generously funded publication of a “new” edition.]

He found his timber in the Lower Pescadero Creek area and signed a stumpage contract with the Levy Brothers, well known for their string of Coastside general stores. Dudfield logged the land west of Memorial Park, setting up his mill in present-day Loma Mar.

With the invention of the steam donkey engine in 1881, Dudfield witnessed the transition from skid roads and oxen to yarding by cable. The old-fashioned methods of logging that some found charming were gone; the oxen were put out to pasture, and their drivers were replaced by cables winding on a spindle. The handsome lumberman found he could pull logs out of remote places with the use of cables and a small donkey engine.

Prices were good enough to warrant the three-day trip in a wagon drawn by six horses to carry 4,000 feet of lumber from the mill in Loma Mar to Dudfield’s Palo Alto lumberyard.

While the steam donkey engine changed the face of logging, the crew members remained an unusual touch.

James Foster, a millman who worked in Purissima Canyon and a decorated sergeant who displayed bravery in South Africa’s Boer War (1899), murdered San Gregorio bartender Claude Packard for no known reason, before turning the weapon on himself.

To all observers, the murder was inexplicable. Perhaps the men who chose logging were hard-drinking, hard-living and unpredictable.

Some six years after John Dudfield began logging in the Lower Pescadero Creek, the timber was exhausted, and the mill was closed. Dudfield next eyed Lynch’s Gulch in the upper Lobitos Creek, where he planned to mill shingles in 1913.

W.J. Savage’s precious grove of redwood trees was in jeopardy.

Lobitos Creek, between the Purissima and the Tunitas, –and shorter than both of them –also had the smallest grove of redwood trees. It was always believed that there were too few trees to warrant a larger lumbering project, and that it was too inaccessible for a small one.

Perhaps that very inacessibility made it a challenge for John Dudfield to provide a source of shingles for his Palo Alto lumberyard. He planned to launch the largest attempt ever to log the roadless Lobitos Canyon.

Dufield’s shingle mill was dragged into the canyon and set up among the trees at the bottom of Lynch’s Gulch, long after the death of Paddy Lynch and his wife. Above it, a tramway was built to take the shingles to a higher yet level, according to “Sawmills in the Redwoods.” Wagons were loaded at the tramway landing and made their way over a road from “Irish Ridge,” “Bald Knob,” to Tunitas Canyon Road at “Grabtown,” a shantytown, with Palo Alto as the final destination.

It was a frigid day in January 1913 when W.J. Savage, accompanied by a boy carrying a rifle on his shoulder, hiked into the isolated Lobitos Canyon. Even the sun felt cold. An icy north wind blew as the pair followed the rugged pathway through fields and thickets on the pilgrimage to the site of the doomed redwood trees.

No trees had been felled there since 1882, and W. J. marveled at how a three-decade reprieve had returned Lynch’s Gulch to the primitive, wild grandeur he remembered as a child. This would be his final visit to the grove he loved.

When Dudfield’s Mill came into view, Savage’s first thoughts were: “This is where the bodies of the big trees will be cut and slashed without a pang…”

Under a profusion of lacy ferns, Savage recognized the old sled road used by the old-time loggers. A donkey engine, two big boilers, cable drums, piles of iron rails, journals and boxes lay on the ground. He noted grading for the railroad by the railroad had commenced. But on this bitter cold day, none of Dudfield’s crew could be seen.

Nostalgia must have overwhelmed Savage when he saw “One-Eyed Sam” and “Big Bill’s” cabin, now “frail and covered with moss,” standing near three, new, but less picturesque cabins built by John Dudfield. He wondered where “Wild Rose Ann” was.”

Savage walked past the woodsmen’s old cabin, and further up the trickling streamlet, the source of Lobitos Creek, where there never had been any sled roads and no trees had been felled. It was there that he admired a 10-foot-wide redwood tree pointing skyward.

A great sadness overwhelmed W.J. Savage as he recalled his youth and the magical forest he had known. As soon as he returned home, he penned a long letter to the “Redwood City Democrat.”

Under the headline, “Plea for the Last of the County’s Giant Trees,” W.J. poured out his heart with these words: “Wheels will turn by the force of wheels, saws will rings, men will laugh and joke, a few dollars will change hands, millions of shingles will be made, but, alas, upon that spot the last of San Mateo’s redwoods will disappear.”

But John Didfield did not completely log out the canyon. He shut down the mill and reopened it in 1920. This time, with the use of trucks, he was able to haul shingles to Palo Alto. In the mid-1920’s, Dudfield suffered a stroke and the business was liquidated.

Later fire destroyed the mill and tramway. Some small-scale logging occured periodically but some virgin trees, up to 7-feet in diameter, may still grow in the lonely gulch.

“The dreamer sees and knows what should be done,” wrote W.J. Savage in 1913. “Where is the man with a few thousands to spare who will save this grove of redwood and secure for himself a living monument more enduring than the most costly mausoleum ever chiseled from marble?”

W.J. Savage’s gentle nature poetic skill and great love for the giant redwood trees was not enough to save them all. But his words stand as his own monument.