I’m looking for my photos of this area. But, check out these screengrabs 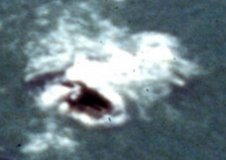 from CCRP of the Cove’s entrance and a magnified view of a rock and its whitewater, right in the middle of that channel. You can almost see ghosts in the foam.  It would have taken a lot of liquid courage out on the mothership before I’d be ready to attempt a nighttime landing there, even in a calm sea, with that monster waiting for me,

The screengrabs show what boldness or desperation must have driven  the smugglers to attempt a landing in Smuggler’s Cove. I’ve been thinking about the level of Customs enforcement that would have made this an attractive place. I’ll have to research that era better. For now here are a few of the pictures of Franklin Point and Smuggler’s Cove that I could find easily.
The first is, “The Fist,” 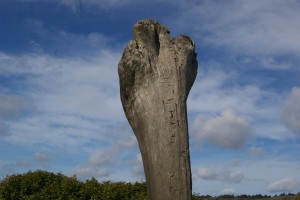 for which the beach north of Franklin Point gets its name. At first, when I read the name of this beach in an old newspaper article about relatively unknown beaches, I didn’t relate it to the large piece of driftwood pictured. I’d never named it, but thought of it as the beach with the upside down tree, missing its obvious likeness to the upraised fist immortalized at the 1968 Mexico City Olympics. How, who, and when, somebody went to all the work of creating this bit of whimsical and pareidolic art-play is a mystery to me. Whether they are the person who then named their creation and the beach to the west, “The Fist,” I also don’t know.

If you look at Picture #200810136 (large file) on the CCRP website you can see a great picture of Franklin Point, the paths leading to it through the re-vegetating dunes, and way at the top is the pull-off on Highway 1, with  two cars and the mighty raised “Fist” just visible.
The second, third and fourth photos 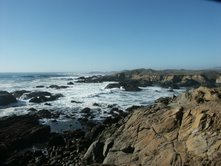 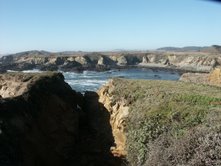 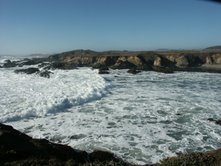 I’ve attached were all shot a few years ago from the promontory on the southside of Smuggler’s Cove, that Linda referred us to in Picture #7219014.

As you can see, thanks to the missing sand, the Cove is even more unfriendly now than it was decades ago. Compare the appearance of the Point’s dune field in the 1972 and the 2008 photos, and you can see why there isn’t much sand on the beaches south of Franklin Point these days. The Ranger’s re-vegetation efforts have been quite successful, but had the consequence of reducing the source of sand for the beaches locally. I guess you can’t have it all.

is from one of the coves south of Franklin Point and might be Smuggler’s Cove. I don’t know why I don’t have a closeup.  Next time I visit, I’ll shoot up a lot of Megapixels of the area and look for polished whiskey bottle remnants. Enjoy. John
This entry was posted in Uncategorized. Bookmark the permalink.