Hi June,
As you know my avocation is to explore every legally accessible inch of the San Mateo coastline. I just added a short, but interesting, stretch yesterday that the locals used to call “The Gravel Quarry.” I’ve known about this area for some time, but was “creeped out” by the circumstances surrounding access to this unusual, perhaps unique chunk of our coast.

Most of the areas I visit are isolated, lonely spots where you see no one and no one sees you. But here you park in front of somebody’s house, walk through a hole in a privacy fence and stroll alongside their driveway and house until you reach a picturesque point.

When I first made a serious attempt to visit here a few months ago, I found several new four- by- four posts, with their signs removed, where I had been told the access was. I didn’t like the vibes, let alone the creepiness of seemingly trespassing on somebody’s property. Unsure I contacted Linda Locklin, the California Coastal Commission Public Access Officer, about the reputed access and what I thought might have been vandalism of the sign posts by nearby property owners, perhaps unhappy about the public visiting their gorgeous bit of coastline. I was in the right place but was wrong about the missing signs. It seems that CalTrans had put up the wrong signs as specified in the agreement reached by the government and the landowners and then had to remove them. They are on interminable back order and should be re-posted eventually.

Armed with the knowledge that the law was on my side and familiarized by an article by Lennie Roberts of the “Committee for Green Foothills,” all about this place, (found at: http://www.greenfoothills.org/news/2003/03-2003_CoastAccess.html ) I finally decided to check it out. I’m glad I did. Though it isn’t one of the top places I’ve visited on my San Mateo coast visits, it does have its own charm.

While looking at Picture #6291 on the California Coastal Records Project, I was mystified as to why it called “The Gravel Quarry.” My visit quickly cleared that up. The rock here is composed of an unusual conglomerate of millions of rounded river rocks cemented together. It looks like people long ago could drive right down to the shore and load up, using picks and shovels or a frontloader. It was the historic use of this resource and the longtime popularity of fishing from the nearby rocky points that gave the California Coastal Commission the right to demand access from the people who bought the property and built a house.

Besides the view and a couple of nice sea caves below the bluff, you have the right to walk along to the south for a hundred yards. Here’s something else noteworthy: While standing on the cliff, I observed repeatedly a rainbow spume effect. The waves entering some feature in the cliff below me were being rebounded in a cloud of fine spray in which the afternoon sun was producing a persistent rainbow. As always, my photographs didn’t capture things as well as my eyes, but I’ll attach some photos anyway. 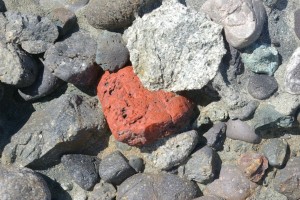 While we all have the right to visit this spot, I would urge everyone to be sensitive to the privacy and property rights of the nearby landowners when you do. It’s not only the right thing to do, but pragmatically strengthens the Coastal Commission’s ability to restore the public’s right to access our beaches elsewhere without the angry, litigious, and potentially violent confrontations, that you wrote about in your book, “The Coburn Mystery.” Enjoy. John Vonderlin 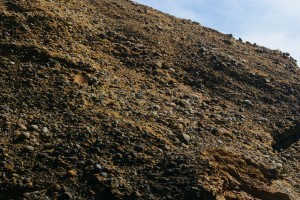 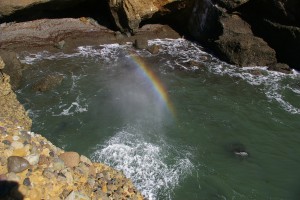 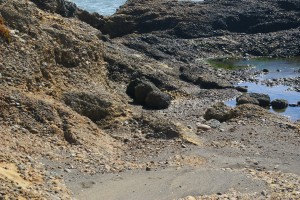