John VonderlIn: Huge New Clues in the “Mystery of Monty Parker/Message in a Bottle” Story 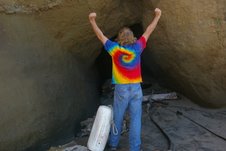 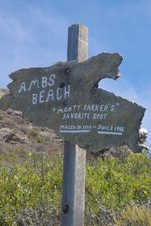 I took my twins to the coast yesterday afternoon.  We hiked down to Greyhound Rock and explored the surrounding tide pools.  On the way back, I noticed a truck in the small turnout directly above the Monty Parker sign.  We hiked down to the sign and found two ropes going over the edge.  Off in the distance, toward Warm Water Lagoon, we saw two men and a dog building a fire.

I remembered the jar you left at the base of the sign and checked it.  Someone left a note!  I did not take the note, since the spot feels like a shrine, and I don’t have the contents committed to memory.

Here’s what I recall.  Monty Parker was a long time resident of the area, an avid explorer, and abalone diver who drowned just off that spot while diving for abalone.  He was a high school sports coach, and there is a sports field (Parker Field) named after him.  The school name was abbreviated, and I don’t recall the initials.

I was sure the gentlemen down below were acquainted with Monty Parker, and I wanted to wait for them to ascend the rope.  However, it was getting late and the kids were getting antsy.  Instead, I left my business card on the windshield of the truck and invited them to call me to discuss Monty.

Several hours later, I received a call on my mobile phone.  No message, but I’m pretty sure it was one of the climbers.  I called back and left a message.  I will let you know if/when I connect with them.  Hopefully, they can unravel the Monty Parker mystery.  Also, I would love to know how they got their dog down the cliff!

Hope all is well, and my best to Meg,
Larry

Hi Larry,
Great to hear from you. I think you are more then halfway to solving the mystery. Monty having drowned at that beautiful spot is sad, but he was doing what he loved at his favorite place in the world. I should be so lucky(in a couple of decades). It certainly explains how somebody in good enough shape to rappel down the cliff would die so young. I’ve been websearching various combinations of terms from the info you provided, but no hits yet.
It’s great your kids are already accompanying you on some of your adventures. They’re only seven, right? With any luck in ten years they’ll be teasing you about keeping up.
Like you, we also used the tremendous lowtide to check out some of the coast on Friday. We were able to climb out on the far end of Pillar Point from the northside, out to just landward from the Maverick’s surf spot. I haven’t found any Internet mention of anybody else doing it yet, but it seems so much tamer then our previous trips to Acid Beach or The Notch, I’m sure somebody must have. It does take a great low tide though. In a nice bit of synchronicity we discovered a very photogenic walk-through arch that is invisible on all the CCRP photos and also is not mentioned anywhere on the web.. Takes the sting out of knowing where WALDO isn’t.  I’m writing a story about it that’s almost done.
Pillar Point was actually my second choice, but the fairly large-sized waves on that day made a second try at probing north from Gordon’s Chute a bit wild. June just posted the story about our first try. Why don’t you check it out and see if it’s something you might want to try someday. Apparently, it would take a combination of the lowest tide and calmest waves to make it possible to walk and wade through part of it. But, using a boogie board and fins it seems quite possible. It is a spectacular stretch of coast with an amazing number of sea caves.
Next trip to Amb’s, I’ll photograph the note and leave another one thanking whoever left it.

Thanks again for following through. Meg and I wish you and your family the happiest of Holidays and hope to see soon. Enjoy. John