Posted on December 8, 2008 by June Morrall
Treasures from the Sea
Story by John Vonderlin
Email John ([email protected])
Hi June,
Our recent trip to Franklin Point and Smuggler’s Cove produced a Santa Claus-sized bag of sensory presents; thundering big wave surf, the tang of fresh, salt-laden air, and sweeping, eye-popping vistas from an isolated rocky point overlooking the vast Pacific, all on a mild, sunny, nearly windless, December day. It was pure frosting-on-the-cake that the day’s trip also provided a  gaggle of ejecta oddities, freshly thrown from the deeps into the shallows for me to marvel at.

This first one is some type of egg mass. I’ve photographed other similar masses, some weighing 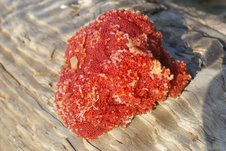 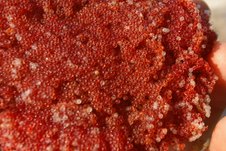 several pounds. But, they were all colorlesss and the eggs were much larger and opaque. Whatever creature produced these obviously has a good sense of style and color, as this is a thing of beauty, even though its presence on the beach was fatal to its crew.

I am a collector of soles. I have hundreds in storage, patiently waiting till the promised “Sole Man” piece of artplay comes to life and they are reincarnated. But none can compare in commensal hoariness with this one I found in Smuggler’s Cove. My guess is that it was wedged 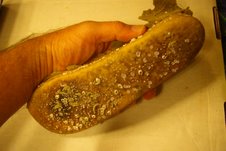 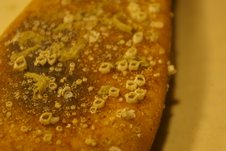 somewhere, immobile for a long time, giving the constancy of environment necessary for the barnacles to grow. Only when the leather top rotted was the sole released to be borne  into the upper world and into my hands.

While out at the end of Franklin Point Meg noticed this little Mini-Me sea arch. I wanted to add it 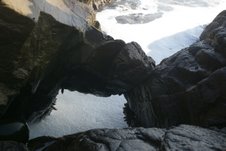 to my catalogue of Coastside sea arches, so I climbed down to photograph it and was given a little surprise, with a foam topping. 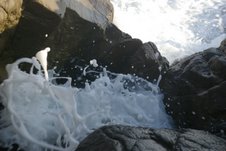 The different kinds of tafoni at this spot are spectacular. Here’s a few pictures of what is called 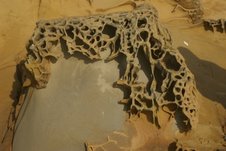 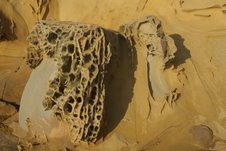 honeycomb tafoni. I found a new website, “tafoni.com” that explains some of the mysteries about this unusual phenomena as well as cataloging its types.

The last oddity of the day was this unusual rock I found on our way home. Fossilized donut? 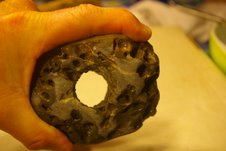 Bagel? Product of molluscs? It is almost surely natural and yet the central hole is so circular and straight-sided that it would seem to rule out a piddock clam as the creator.

Whatever its source it was a nice finish to an interesting buffet of nature’s oddities that day.  Enjoy. John

This entry was posted in John Vonderlin, Smuggler's Cove. Bookmark the permalink.