Push & Shove: The Life of a Giant Limpet: Story by John Vonderlin

Posted on December 5, 2008 by June Morrall
Story/Photos by John Vonderlin
Email John ([email protected])
Push & Shove: The Life of a Giant Limpet
Hi June,
I was in the middle of selecting photos for the posting I am writing about our trip to the proposed Worley Flats dam site, when I came across something I’d forgotten. That day we also visited Invisible Beach, and thanks partly to a good low tide, but mainly because of the unusually high level of sand that was present, we were able to walk further out then ever before, around the large rocky promontory that bounds it to the north.

I was photographing a usually submerged rock that had an unusually diverse  group of mussels, limpets, and several types of barnacles all growing together on it, labelling it mentally, the “We Can Just Get Along,” photos when Meg called for me to look at a giant limpet.  She was right, it was a giant, the biggest I’d ever seen. It was nestled in an alcove in the lee side of a mat of mussels, apparently enjoying their company or at least the partial.shield from the surf they provided. It was so big that it had other limpets attached to its ancient, battered shell. 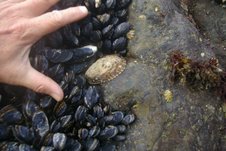 Moving on I was amazed to see an even bigger brute, half again the first one’s size. 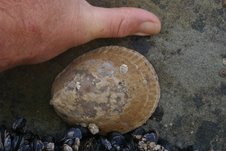 This one appeared a little more standoffish from his Mussel rockmates and was in a clear spot on the rock, unprotected from the waves, just barely touching his mussel neighbors. It too had friends along for the ride on its weathered shell. 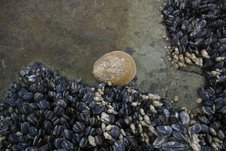 Well I did some research on limpets and discovered I was interpreting the scene I was looking at very wrongly. Limpets, at least of this species, are  bullies. The are also territorial farmers who watch their fields of algae carefully where they grow in a clearing on the rock, defending them from others of their own species, as well as other interlopers.  They graze the algae growing on their own farm/clearing in a sustainable fashion, that ensures long term productivity. But if they should stray into a neighbor’s field, they reveal their darker side and will eat everything in sight (or smell) until driven off. They accomplish this with trespassers, ramming the target with the edge of their shell followed by non-stop “shoving.”

As the tide recedes they return from their field, probably guided by pheromones contained in the slime trail they left, to their “home scar.” The combination of the contour of this “home scar,” eroded into the rock, and the limpet’s shell growing to fit its contour, helps the limpet make a better seal. When the waves return, or predators attack, this probably helps the limpet suvive until it can return to tend its field again.

Part of the field’s tending involves pushing the various molluscs that are growing at the clearing’s edge back, so they won’t shrink its size. In fact, my guess is, as the limpets grow larger, they need more food and hence spend a lot of time expanding their “empire,” pushing “trespassers and squatters” off the new farmland needed.

You might say there is a perpetual  “Range War” going on right beneath our noses, but its skirmishes are fought not at High Noon, but at High Tide. Enjoy. John 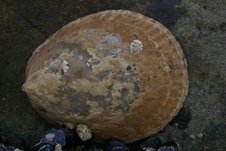 Some species of limpets return to the same spot on the rock known as a “home scar” just before the tide recedes (BBC). In such species, the shape of their shell often grows to precisely match the contours of the rock surrounding the scar. This behavior presumably allows them to form a better seal to the rock and may help protect from either predation or desiccation.
It is still unclear how limpets find their way back to the same spot each time, but it is thought that they follow pheromones in the mucus left as they move. Other species, notably Lottia gigantea, seem to “garden” a patch of algae around their home scar (Shanks 2002).
Lottia gigantea also are one of the few invertebrates to exhibit territoriality and will aggressively push other organisms out of this patch by ramming with their shell, thereby allowing their patch of algae to grow for their own grazing. Also, where the limpets eat the algae off bare rocks, it creates places where other organisms can grow and thrive.
This entry was posted in Giant Limpets, John Vonderlin and tagged John Vonderlin, Limpets. Bookmark the permalink.