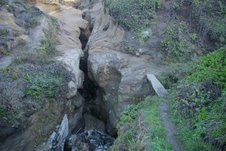 I had a chance to return to “The Cracks” a few days ago to shoot some better pictures of a very nice Sea Arch, that like so many others along our coast, is virtually unknown. This one, a relatively small and delicate arch, can be accessed by hiking at low tide north along the beach from the northernmost Pescadero Beach parking lot. I prefer to get to it by a more picturesque, if slightly more dangerous route: “The Cracks.”

This route, and the beach you arrive at by taking it, is also known as Horseshoe Cove, the Gulch, and on the California Coastal Records Project (CCRP ) is captioned  “Keldabeach.” At one time it was quite popular, but by closing the parking lot above it along Highway 1,  “Keldabeach”  has faded into obscurity. I was able to find only one article from a 2002 Sunset Magazine, “A Beach of One’s Own,” that vaguely described it. And this despite San Mateo County’s website and numerous surf websites listing “The Gulch” as a beach between Pomponio Beach and Pescadero Beach. 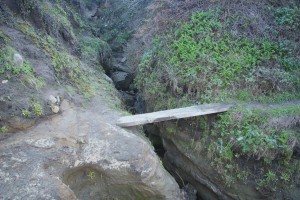 If you go to the CCRP website and look at the 1972 picture, (#7218053) when the parking lot was open, you’ll see no less then 13 cars parked in it and an obviously heavily-used trail to the beach. Today, you have to park in a narrow strip alongside Highway 1, walk down a long slope and then traverse an “Inca Trail-style path” that terminates in a twenty foot climb down a steep-to-sheer cliff that has hand and footholds carved into the sandstone. A bit exciting, but well worth it. Just before you reach that narrow cliff-side trail and the carved-in-stone ladder, the origin of the moniker, “The Cracks,” becomes obvious, as you need to first jump across a deep water-eroded crack in the sandstone, then walk across a board stretching across another deep but narrow crack.

Having reached the beach, and assuming the tide is low,  you can head south about 300 yards to reach the arch. About two -thirds of the way there, just above a seasonal waterfall that plunges down the sheer cliff, you will see the opening of the World War II observation tunnel I’ve written about previously.

With the sun shining through it you can see the arch from a distance, though it looks quite small from this northern approach. 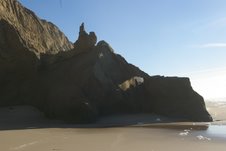 Going to its south side, I was able to climb on top of the promontory and got these pictures that show it off more impressively. 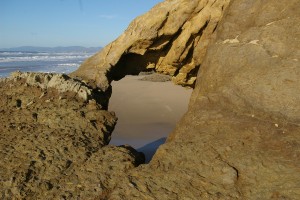 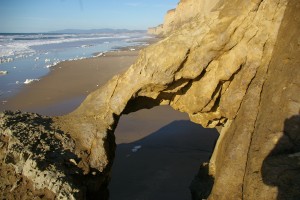 I almost wasn’t able to do so, not because the steep climb up was too hard, but rather I had to sneak by a large, battle-scarred Elephant Seal sleeping nearby. I can’t remember ever seeing a live one this far north from the beaches of Ano Nuevo, but perhaps as their numbers continue to increase this will become a  more common sight. 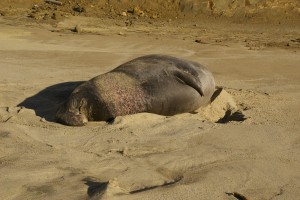 One last aspect of this interesting visit to a infrequently-visited stretch of our coast was the fact that there were large amounts of very clean, white foam being pushed around gently by the waves. Occasionally, pieces as big as watermelons would be broken off from the billows by the gentle winds, and they would slowly and majestically roll along the beach maintaining their shape for a surprising distance, a final delight of the visual buffet the Coastside rarely fails to offer the guests who come to enjoy its wonders. Enjoy. John 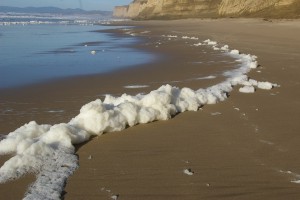