1886: Pigeon Point lighthouse was in defalcation: Story by John Vonderlin 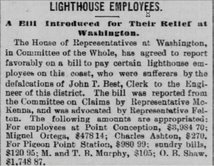 After reading JoAnne Semone’s article in “La Peninsula,” coupled with my Rob Tillitz correspondence, regarding photographs of the Pigeon Point area (to help him promote his book, “Smuggler’s Cove”), I think it’s time to add my two cents.

I found the following article in the Newspaper Archives:
LIGHTHOUSE EMPLOYEES
The Daily Alta
May 17, 1886
“The House of Representatives in Washington, in Committee of the Whole, has agreed to report favorably to pay certain lighthouse employees on this coast, who were sufferers by the defalcations of John T. Best, Clerk to the Engineer of this district. The bill was reported from the Committee of Claims by Representative McKenna and was recommended by Representative Felton. The following amounts are appropriated: For employees of Point Conception $3,934.70; Miguel Ortega $478.14; Charles Ashton $270; For Pigeon Point Station $980.99; sundry bills $120.95; M & T. B. Murphy $105; O.B. Shaw $1,748.87.”

I had to look up defalcate as I wasn’t familiar with the word, although the context is clear. It means to embezzle or misuse. In Medeival Latin it meant “to mow” from its root of “falc” meaning a sickle. And of course defalcatio means to lop off as every limerick fan probably knows.

Representative McKenna, mentioned in the article, is Joseph McKenna, considered the embodiment of the Horatio Alger stories, being the son of poverty-stricken Irish Immigrants fleeing the horrors of the Potato Famine. Here’s an excerpt from his Wikipedia article.

Joseph McKenna (August 10, 1843 – November 21, 1926) was an American politician who served in all three branches of the U.S. federal government, as a member of the U.S. House of Representatives, as U.S. Attorney General and as an Associate Justice of the Supreme Court.

Born in Philadelphia, Pennsylvania, the son of Irish immigrants, he attended St. Joseph’s College and the Collegiate Institute at Benicia, California. After being admitted to the California bar in 1865, he became District Attorney for Solano County and then served in the California State Assembly for two years (1875-1877).

Representative Felton was almost surely one of the children of John Brooks Felton, for whom the town of Felton was named. John Felton (1827-77) was a Harvard-educated lawyer and judge, as well as mayor of Oakland, a UC Regent and twice unsuccessful candidate for US Senate. While Representative Felton and his father left a positive mark in the Bay Area’s history, it was his sister, Katharine Conway Felton who changed the world. This article from Wikipedia tells why:

Katharine Conway “Kitty” Felton (1873 – 1940) is a name that became synonymous with social work for her innovative reforms over the 40 years of her tenure as head of Associated Charities in San Francisco beginning at the turn of the 19th century.

Katharine Conway Felton was born in Oakland, California, on July 7, 1873, the daughter of a prominent San Francisco Bay Area family. Her father John Brooks Felton, was a judge and mayor of Oakland and has the Santa Cruz County town of Felton, California named for him. She was called “the conscience of the city” because of her dedication to social work.

In 1901, at the age of 28, Felton was appointed director of Associated Charities (now Family Service Agency of San Francisco).

In the crucible of the 1906 San Francisco earthquake and fire, she became the head of the social service efforts to restore the life of the people of the city and developed innovative solutions that are common practice today. She created the first employment agency in the United States, developed mental health counseling to deal with the traumatized, became an advocate for foster care, and by combining private and public funds made it possible for widowed and single mothers to remain at home with their children.

She also was responsible for emptying the refugee camps and finding placements for the dispossessed, all of which she accomplished within one year. These innovations became known as the “San Francisco Model” by 1907 and swept the nation as the primary mode of social service throughout the country by 1909.

For those interested in learning more about this amazing woman there is a biography by Jean Burton that details her accomplishments. Enjoy. John