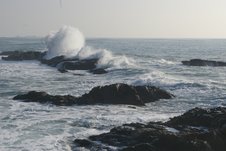 I visited with my dad on Thanksgiving and got some more details about Bootleggers Cove and other interesting stories from WWII that I will share at another time.

The cave was pretty big and deep, enough for a grown man to carry and store crates in.  The man Benzanni (not sure of
the spelling) that used the cave boarded  with my dad’s family at the White House Ranch and worked for the Humphreys. Benzanni was big and gruff and apparently lost all his money in the depression.  Money made by bootlegging, I suppose.

The cave collapsed before the 1960’s because my brother said there was no cave when he went to the cove.  My dad says the coastline has changed so much over the years that it probably would not look like he remembered it.  I didn’t show him the pictures you sent, but I will next chance I get.

I thank you for taking the time with me on this.  My dad has really enjoyed talking about his childhood.  He remembers more all the time.

His family moved to Pescadero in the early 1930’sm and his step mom’s family, the McCrearys, lived there at least since the early 1900’s.  I don’t know much about that just yet. 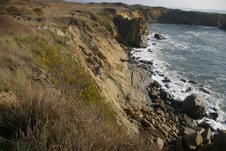 Hi Linda,
Thank you for sharing your Dad’s past. I’d love to hear any stories he might remember. The coastal defenses during W.W. II are something I’m especially interested in. Or the remnants of the Ocean Shore Railroad. Or Pescadero in the 1940s? Or Gazos in the 70s?

We went out to Franklin Point and Smuggler’s Cove recently to take some photos from a smuggler’s point of view.  We used to call the cove, Abalone Cove. Reason why: The first time we went there it was a hazardous climb down to the beach, and we noted that a lot of beachcombers must have been turned back because there were so many pretty, collectible abalone shells lying about.

We were actually drawn to this spectacular stretch of beach because we were searching for buoys. Isolated, hard to access coves, the kind smugglers might have favored, are also the best places to find errant buoys. Remembering the trip as I email you, I can visualize the weak light and our route out of the cove.

Does your Dad recall how the cove was accessed? Or more importantly, how was smuggled stuff pulled out of the cove?

I’m especially curious, because, having made the hazardous climb down the cliff, and not wanting to retrace our path carrying our treasures, we decided to leave by a different exit: the intimate canyon that breaks the cove’s cliffs at its southeast curve.

Initially, there’s a small animal trail, but that quickly fades away as the brush grows heavier, concealing veins of dreaded poison oak. My brilliant idea of using the shortcut turned into a bona fide nightmare as we shoved through the poison stuff for a hundred yards, holding our buoys high, all the while trying to shield our bare skin from making contact with the painful rash-giving plant.

Say it was the 1920s or 30s, I still think if you were lugging crates of hooch, this would have been the most likely trail out. You know, there might even be an old rotting crate,  holding bottles of  really well-aged booze, that was hidden in the brush, forgotten, and waiting to be re-discovered.

A couple of the pictures I’ve attached show the cove from Franklin Point. The “trail” we took out of the cove is just above the logs on the beach. I’ll attach a few other pictures of the cove’s dangerous mouth that the smuggler’s boat would have had to pass through. But, not on a day like the pictures show, unless they were crazy.

Thanks again for sharing. And for giving us another reason to visit what Meg calls “the most ruggedly beautiful place along this coast.” She might be right. Enjoy. John 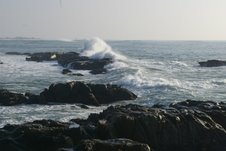 Apparently the beach at Bootleggers Cove was much different in the 30’s and 40’s.  The beach was sandy and large enough for family cookouts.

The cave was pretty much right in the center of the cove, with the beach on one side and cliffs on the other.  It was hard for my dad to describe to me how they got to the cove since I haven’t been able to show him the pictures.  Unfortunately he’s in the hospital awaiting hip surgery so we are only able to have short conversations at a time.

I did ask him what he remembers of the railroad, and it’s not much.  Just that they started building the lines and when they stopped, people in the area would take apart the trestles for the wood.  He went to the trestle area at San Gregorio Creek with Pat Bell at one point, and they were surprised when they climbed down to the beach to see that it was being used by nudists.

As for WWII, there was a Coast Guard Shack on White House Creek beach where they kept a dog that my dad remembers bringing food to.  Also along Rossi Road there was an Army Camp.  The ranchers and farmers in the area were called to service.  My dad’s dad used to go to Cascade Ranch once a week and take his turn at watching for Japanese planes.

Along Pescadero Creek Road, to the right after leaving the highway, was an area that was owned or leased by Japanese but they were sent away, my dad said, to somewhere in the desert.  Anyway, after they left, they found radios apparently used to contact Japanese ships or planes.  Maybe this was written about in the newspaper and can be confirmed.

Hope you find some of this as interesting as it has been for me,