[Note:  Colonel Albert S. Evans, the author of A La California (1872), was a close friend of  New York Herald publisher Horace Greeley, famous for his “Go West, young man” declaration.  What was Colonel Evans doing, exploring California, to the north and south? Was A La California a kind of 19th century “Guide to the Golden State?” –June]

I mentioned that the sand bar blocking Pescadero Creek’s flow into the ocean was recently breached in my posting about our investigation of the alleged proposed loop route of the Ocean Shore Railroad. I was amused to learn yesterday that a couple, apparently hoping to watch the event unfold, had been stranded on a rock at the creek’s mouth, when the rapidity of the process once it began caught them by surprise. An expensive and embarrassing helicopter rescue was effected, with no loss of life.

The following story, extracted from “A La California,” an 1873 book by Albert S. Evans, deals perhaps with those same rocks, but is not as bloodlesss for all concerned. There are enough politically incorrect aspects in this story to offend a great number of people, but I would urge you to judge the author as a man of his times, not today. As a former fisherman, I can’t help but wish I could have experienced those times and their amazing abundance, even while I know the careless, even callous, behavior of sportsmen of the time is what helped produce today’s degraded situation.
*****
“Pescadero” is the Spanish for “fishery,” and the name is indicative. The creeks that come down from the mountains all along this coast swarm with the spotted trout of California, and afford fine sport in the early part of the season. In places along their banks, the honeysuckle bushes and other shrubs and vines form a chaparral that you must wade through for miles to whip the stream; but one hundred, two hundred, even three hundred trout are often basketed in a single day’s fishing by one individual. It does not rain here from April to the last day of November or December; but as the days grow shorter, and the sun’s rays less powerful, the evaporation that causes the streams to dwindle to mere strings of detached ponds decreases, and all over the State, especially in the Coast Range, the streams begin to rise. Thompson, an hospitable landlord, took me down to the mouth of the Pescadero for a little sport. We sent a Mexican after worms for bait. the Mexican sent a negro, and we sent a Chinaman after the negro, and got them all back at last.

The row down the creek was short. We saw hundreds of mallards and teals, which we could not shoot for the law forbids it–very properly–until the fifteenth of the month, and large flocks of long-billed curlew and other birds, such as crows, buzzards, gulls, etc. etc., that we did not want to kill. There is a bar at the mouth of the creek and we chained our boat to a high rock inside it and walked down to the ocean. The shores were lined with drift, great trunks of pine and redwood trees, timbers of wrecked ships, etc., etc., and the scene was wildly romantic. We passed the festering carcasses of half a dozen great sea -lions, which had been killed by a fishing party with Henry rifles some weeks before. The fish come in the creek with the tide, and bite best before the tides commences. If the sea lions who cover the rocks just outside, follow them in the creek, the fish all run out–and there is no more sport that day. So the fisherman shoot some of the sea-lions and the rest leave. Before we reached the mouth we saw two wolves on the opposite shore near the breakers playing like dogs. One ran off when he saw us and the other raised his nose and voice, and treated us to the most vivid illustration imaginable of:

“The lone wolf’s howl on the Onalaska shore,” and then followed his companion. As we rounded the bluffs we saw some rocks covered with sea-lions. It was low tide and we could run out to within fifty yards of them. I had a large-sized Smith and Wesson, a capital weapon for such use. I sent a bullet into the side of a big fellow who was lying high up and presented a good mark. The ball struck him with a dull thud, and as he rolled into the waves the whole herd went splashing after him. Half a dozen of them swam down in a line twenty or thirty yards of us, and looked at us with their great lustrous brown eyes, whether with anger or sorrow we could not tell, until I hit one on the head, and as the bullet glanced off, he disappeared with a grunt and a porpoise-like dive. Thompson took the pistol, and when one rose again he fired and hit it squarely in the mouth. He shook his head from side to side, as if blind with pain, then went down, leaving great dark spots in the water. They all started then off southward, and I was not sorry. Inveterate sportsman that I have been from my youth up, I cannot get over the feeling that killing defenseless creatures like these, and allowing their bodies to rot on the beach, is something akin to murder.

“The rocks we stood on, and which are covered at high tide, were incrusted with mussels of immense size. Some of them measure twelve inches in length, and Thompson tells me he has seen them fifteen inches long. They are fat and luscious, and some epicures come down to the coast every season to indulge in clam-bakes and mussel-roasts; but this species of shell-fish is so common, and consequently cheap, that not one in ten of the people of the State of California have eaten them. In holes in the rocks, filled with pure sea-water, we saw curious things like sunflowers, with bright green petals. These we could not detach from the rocks, and at one touch they curled up into a slippery ball with all the petals inside.

“We went back to our boat as the tide came booming in, and prepared to fish for salmon-trout as they are called; really they are yearling and two year old salmon. They will bite at a worm, spoon, or fly, but best at worms. I had hardly put in my hook when a noble fellow made the line fairly hiss through the water for a few minutes. Then we drew him in, panting and exhausted with his struggles, alongside the rocks, and then with a landing net got him in the boat. He was twenty inches in length and the handsomest fish I’ve ever caught. Eight and ten pounders are common, and they are the most delicious fish for frying and broiling which ever swam the sea. Great crabs came in with the tide and we dipped several of them out with our net. In two hours we corralled fourteen of the salmon-trout, losing several more because of broken hooks, and then, the slack-water coming on, and the fish ceasing to bite with avidity, hoisted sail and went gliding swiftly upstream to the hotel. It was, all in all, the best morning’s sport I’ve ever enjoyed in my life. and I have shot and fished from the Red River in the north to the Rio Grande, and from the Atlantic to the Pacific.”

I’ve attached before and after stream breach photos of the creek’s mouth and the lagoon behind the bridge. I believe the rock shown at the mouth of the stream in the after pictures is the one the couple was standing on.

Check that same rock, just barely sticking above the sand, in the before photo. It must have been a harrowing time for the couple until the helicopter arrived. 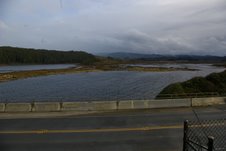 A cheap and instructive lesson for others would are incautious in their desire to observe the power of Nature up close. Enjoy. John 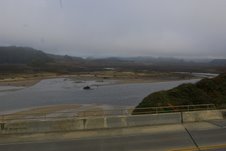 This entry was posted in A La California: Sketches of Life in the Golden State, Colonel Albert S. Evans, John Vonderlin. Bookmark the permalink.