The Ocean Shore did not always take the most direct route…

Hi, John. Thanks for your interesting article and the introduction to a new source (UCR/CBSR). Haven’t yet looked up the clip about the 16,000 #s of explosives set off north of San Gregorio, but wonder if this could be “the some nine tons of black powder” set off to create Saddle Cut, just south of Devil’s Slide described in THE LAST WHISTLE, bottom of page 39 (12/74 printing), Chapter 4, “Reaches the Beaches.” 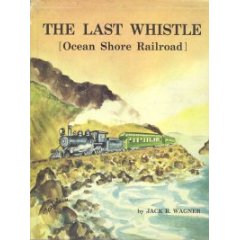 Re: the possible less- than- direct route for the Pescadero area, I must admit I’m skeptical as (I may have indicated this previously). On one of my 1939 trips, I found what looked like a pilot bore at the coastal cliff north of the dune area, lining up with its portal, and leading south into the dunes. It was definitely a grade before it was lost in the dunes.

Granted, the Ocean Shore did not always take the most direct route  (lack of finances, I’m sure) as can be seen by the route chosen around  Rockaway Point , just for one example.  Angelo Misthos

…Meg and I are going to try to find out whether there is the remnant of graded roadbed that  should be there if it was anything more then a “paper route.”   I was pretty skeptical at first, but now I’m thinking it might have been so, based on the planned trestle’s length, the problems that might have been caused by the flooded lagoon that results from the sand bar, etc. I’ll have a posting soon incorporating that, along with an 1873 story of sea lion hunting at the mouth of Pescadero Creek and the huge park planned in the 1960’s for that part of the marsh. Enjoy. John

Hello, again John.  If you should contact  Ms. P—-  again, ask if she recalls whether her Dad had said the Hwy. crew found the Pescadero tunnel, then used it for storage, and what year  he was there.  I can’t recall whether I’d found it using the old highway (further inland–see inset map next to Pescadero pictures), 1939 was a long time ago.  The bore  was open then, but I only had nerve enough to walk in a short way.  On a much later trip I found the entrance boarded up. Re CCPR image 6216 titled Trestle Gap, this is the site of the Palmer Gulch trestle I walked across.  If you enlarge the picture you can see trestle timbers clinging to the gulch and down below.  The enlarged 7928080 image (1979) shows more trestle wreckage.  Re the San Gregorio beach area,  see 6224.  If you look west of the north edge of the parking lot you’ll see what is an elongated bowl shaped hollow, foreshortened by the angle of the picture,  which was done by the OS using hydraulic sluicing as they used to use in the gold-mining days. 1979 image  7928086 may show it better (the dark area); it’s still clearly visible (I believe) driving headed North. It  would have hooked up with grading to be done at the bluffs immediately north. You can see some remnants of grading south of Tunitas and somehat beyond Palmer Gulch, but apparently grading had not yet reached the sluiced out section. I don’t recall where I read about the sluiced out hollow; don’t find it in the Wagner book.  May have been in the Bondholders Report of Ocean Shore Railway to Bondholders (1911, when the OS was reorganized). The S.F. Main Library still has a  copy in the reference section; I looked at it more than once when my interest in the OS was at its greatest and I was looking forward to its revival.  Angelo

This entry was posted in Angelo Misthos. Bookmark the permalink.