[Note: Proposals for these little “feeder lines” went wild after completion of the transcontinental railroad (Omaha/Nebraska/Council Bluffs, Iowa to Sacramento) in 1869.  This led to over-building of iron roads and a crash in the world of railroad building,  a major factor that added to the long financial disaster called the Panic of 1873.]

And John’s tracking them down.
Story by John Vonderlin
Email John ([email protected])
Hi June,
Here are two articles about railroads from Pescadero. Neither is the one I was looking for. The first one is the same railroad I was referring to, the Bowie and Clark, planned from San Mateo to Pescadero, but it doesn’t contain the fact it was to follow Pescadero Creek for eight miles. The second is about a road to Big Basin from Pescadero that was to later be an electrified railroad. It does mention the eight miles shorter. I’ll keep looking. Enjoy. John. 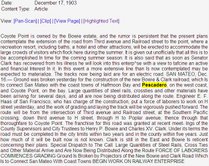 The San Francisco, San Mateo and Santa Cruz Railroad
A meeting of the Board of Directors of the San Francisco, San Mateo and Santa Cruz Railroad Company was held yesterday to review the report of their Engineer. Mr. L.H. Shortt reported that he had made a preliminary survey from Spanish Town to the Santa Cruz County line; that he had been able to get a very favorable line, both as to grade and alignment, and recommended a tunnel through the Tom Moore Hill between Pompinin (sic) Creek and Pescadero. He also reported the results of his reconnaisance of the country between Spanish Town and San Francisco, but requested time for further examination of this portion of the line. After discussion it was resolved to adopt the line as reccommended, and the Engineer was directed to proceed at once to locate the line from Spanish Town within the Santa Cruz county boundary.