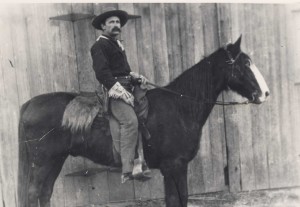 The Crimes of Pescadero, Part II

As long as my recent postings have revolved about  Pescadero Creek, perhaps it is time to return to the Crimes of Pescadero series I wanted to relate. This is taken from the 1883 book, “History of San Mateo.” Once again I’d ask the reader to judge these events in the context of their times, just shortly after Americans began to settle in the Pescadero watershed.

In 1862 a Mexican named Soto and an Indian were living together in a shanty on Brad. Weeks land, below the present residence of Chandler. Another character, know as “English Tom,” lived nearby, and they were all employed digging potatoes for Mr. Weeks. One night Soto enticed Tom to his cabin, and there with the assistance of the Indian, killed Tom with an axe. The body was stripped of its clothing and thrown into Pescadero Creek, the murderers doubtlessly supposing that as the water was backed up to a high stage by the tide, it would be carried out by the ebb to the ocean, and all chances of it appearing as a mute witness against them gone. But here again was an exemplification of the true-ism “murder will out.”  On the following day Mr. Turpin found the body nearly at the mouth of the creek. The sudden disappearance also, of the Mexican, turned suspicion towards him as the murderer. The sum of ninety dollars was raised and Henry Dougherty and H.R. Smith, two veterans of the Mexican War, were sent out in search of the fugitive. They tracked him across the fields toward Redwood City, and going to that place, they found upon inquiry, that he had not been there; they then turned back again towards the mountains and met him at the Davis’s ranch at the summit. On the third day after the murder, the suspect was brought back to Pescadero, tried by a committee of citizens, and swung up from a beam in L. Chandler’s barn. The body was secretly buried where or by whom was never known outside of those who were parties in the affair; all that has escaped the pale of secrecy in regards to this part of it is, that the person who acted as undertaker received ten dollars for his services. The Indian who was Soto’s accomplice saw in this swift and terrible retribution a foreshadowing of his own fate, so in order to avoid an unpleasantness of the sort, he bought a bottle of whiskey at Striker’s store, and drank it to the dregs in one draught. He then crawled into Brad. Weeks barn, below the Swanton Hotel and died. The body was found when it was barely yet cold, and arrangements were made, putting it out of sight without much ceremony. A rough box was knocked together, but on putting the dead Indian in it, was found to be too short by several inches. This difficulty was got over by simply cutting off the head of the corpse and packing it along with the body as best could be done and the lid of the crude coffin pressed down and nailed it was taken across the creek and buried.”

I’ll leave it up to the reader to decide if this is a tale of Frontier Justice applied swiftly and properly given the exigent circumstances or a nightmare story of a possibly racist lynching without proper safeguards of constitutional rights and an appropriate defense. If I had been there with the committee of Pescadero citizens who pronounced and carried out the judgement, perhaps I could more clearly say what my opinion was and what I would have wanted to inhabit my memories for the rest of my life. Enjoy. John