Hi June,
A change of schedule forced us to cancel the trip to the San Mateo History Museum last week, but we were able to use the fabulous weather to cruise the Coastside. One of our destinations was San Gregorio Beach, to resolve the issue of the Ocean Shore Railroad’s proposed path between where its trace disappears just north of the nude beach parking lot to the San Gregorio Highway 1 bridge, which must have been the site of the proposed railroad trestle too. I need to organize that discussion, but wanted to relate a couple of unrelated things we encountered.

The first is that the San Gregorio Historical Plaque #26, commemorating Portola’s Expedition stopping there in 1769, has been stolen by metal thieves.

I’ve attached a picture of what it used to look like and what it looks like now. 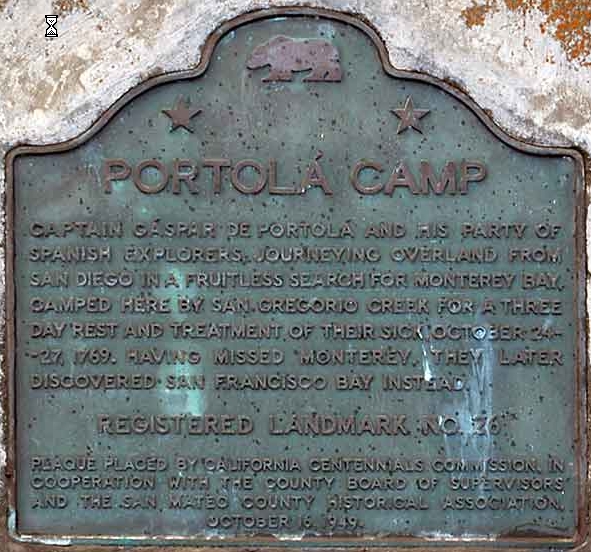 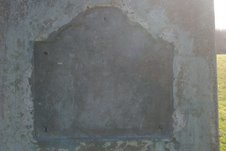 I’ve been noticing lately, undoubtedly due to the, until recently, sky-high metal prices, that even the commemorative plaques on seaside benches, dedicated to the loved ones of the donor are being stolen.

While we can’t watch these, often isolated “rememberances” all the time, I would urge folks to keep an eye out for people carrying unusual tools, like crowbars, and to urge their politicians to pass more restrictive laws on scrap and recycling dealers. Oregon has done so, with limited effect. Perhaps, sting operations to separate the legitimate businessman, who perform a valuable service, from the “fences” that facilitate the crimes of these “scum of the earth” thieves would help.

I call the photos I’ve attached of the largest mushrooms 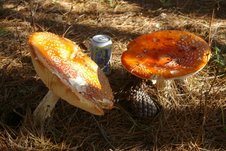 I’ve ever seen on the Coastside or anywhere else, “Pick Your Poison.” I was looking for an item to give scale to how large these are and found an old, but still unopened Budweiser beer can, partially buried in duff, nearby. 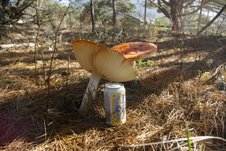 While I’ve been known to quaff a few, I didn’t think several years of aging would have improved its flavor. But we all know what size they are.

The mushrooms are Amanita Muscaria, a very poisonous variety, I’ve written about previously. Enjoy. John
P.S. The plaque says, oops!, said:
PORTOLA CAMP
Captain Gaspar de Portola and his party of
Spanish Explorers, journeying overland from
San Diego in a fruitless search for Monterey Bay,
camped here by San Gregorio Creek for a three
day rest and treatment of their sick. October 24-
27, 1769. Having missed Monterey, they later
discovered San Francisco Bay instead.
REGISTERED LANDMARK NO. 26
Plaque placed by the California Cenntennial Commision, in
co-operation with the County Board of Supervisors,
and the San Mateo County Historical Association
October 16, 1949.