Hi June,
As I mentioned previously, one of the most common of Natural Wonders on the San Mateo Coast, are the rock features called Tafoni. When I first started researching what was causing the unusual formations, I was amazed to find out they were not restricted to the immediate coast, but could be found in the desert or on mountaintops. While the science of their creation in different environments, in different rock types, is still a bit mysterious, here’s the text from a sign that attempts to explain Tafoni.

“The fascinating structures that cover the sandstone are called tafoni, which is Italian for cavern. Geologists first used the word tafoni to describe sandstone formations found on the island of Corsica, and the term “alveolar weathering” to describe the process that created these formations. This complex weathering process that creates the caves, columns and sandy surfaces that are smooth in some areas and covered with labyrinths of knobs and ridges in others, takes place over thousands of years. This is how it works: During the rainy season, water soaks deep into the sandstone and mixes with the calcium that is there. As the water evaporates from the stone during the dry summer season, some of the dissolved calcium is drawn out to the surface of the stone where it forms a hard outer layer called the duricrust. This evaporation process causes any calcium remaining in the interior of the stone to be distributed unevenly so that there are some soft, low-calcium areas and some hard, high-calcium areas. If the outer surface of the sandstone is cracked or broken, the softer parts of the interior erode away more quickly than the harder areas, forming caves, caverns and tafoni formations.”

I’ll attach some miscellaneous photos from my extensive collection. The first photo is from Pebble Beach. 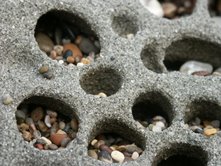 There are a number of better photos online of this type as the combination of Tafoni and the colorful pebbles is irresistible to photographers. The second 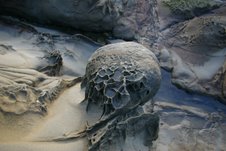 is a variation on that same theme, but on a larger scale. I assumed the pictured rock was somebody’s beach art at first until I looked closely. It is just an example of Nature, abhorring a vacuum or finding a hole and filling it. The third photo 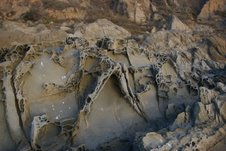 is a cannonball concretion with associated tafoni. The last are examples of the myriad of possibilities that tafoni displays along our coast. Enjoy. John Vonderlin

Biography: The Loma Prieta earthquake in October of 1989 was a defining moment in my life. After those 15 frightening but exhilarating seconds, I wanted to better understand the Earth. Shortly thereafter, I enrolled in a year-long earth sciences elective, taught by Mr. Peterson at Gunn High School in Palo Alto, California. 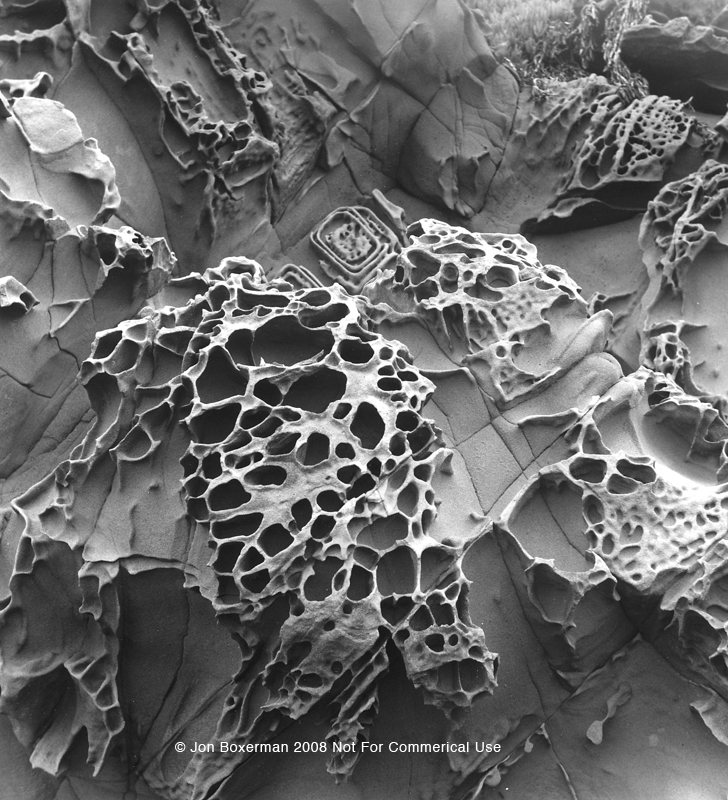 Tafoni, a class of cavernous weathering landforms.
Bean Hollow State Beach, in Pescadero, California is about 3 meters across.
Note the exquiste boxwork weathering in the center of this sandstone outcrop.
Photograph by Jon Boxerman.
I attended UC San Diego where I studied Earth Science at the Scripps Institute of Oceanography. I received degrees in earth science and fine art (photography), working to understand the aesthetics and wonders of art and science. After graduation I worked for several years as a field geologist for an environmental engineering firm. I left private industry and went on to receive a MS in geoscience from San Francisco State University. The focus of my masters project centered on tafoni, a mysterious rock weathering phenomenon. While working toward my masters degree I co-taught sixth grade earth science for a couple of years at a San Francisco Unified School District middle school and was funded by a National Science Foundation partnership program called GK-12. Currently, I am studying Learning Sciences at Northwestern University and funded through the Center for Curriculum Materials in Science, a National Science Foundation funded Center for Learning and Teaching. I also am helping build a middle school earth science curriculum as part of the IQWST project (http://hice.org/iqwst/).Thefocus of my research is on how people understand earth systems science and changes to the earth over extreme spans of time and space.
—————–
IV
Thank you kindly for the compliment on the website. I have put a lot of time into creating something accessible for the general public, so it’s always good to get feedback every once in a while. What did you like most/least about the website?

I spent many many hours and days in Pescadero, as it was the primary study site for a pretty intense geology masters thesis project. I know those outcrops well and think about them often.

Please send me a handful of photographs that you think are really great. There are already a ton posted from places in Northern California, so if you can try to find ones that don’t look quite like what’s already posted, then I’ll throw them up there with you name on them.

I’m really happy June Morrall has linked to tafoni.com. I don’t advertise this site or really do much to spread the word, so whenever I hear of people linking to tafoni.com it brings a smile to my face.

With regards to the “boxed” tafoni, I don’t really think all kinds of boxwork is tafoni (if this is indeed what you describe, or is it the screenshot you sent that you are referring to?), although there are little tafoni between some of the concentric rectangular bands and in the center (possible concretion in the center?). Next time you are out there look in the solid bedrock (not weathered by tafoni) for concentric banding, sometimes a purplish or brown/red color. This concentric banding form is called liesegang banding and occurs when super heated groundwater flows through the rocks when they are buried up to mile below the surface. In the subsequent million year time scales since deposition and diagenesis (e.g., mineral rich groundwater flow when this part of California’s coast was being subducted), the rocks have since been uplifted. Some of the bands are enriched in iron and magnesium cements while the spaces between them are depleted. When it begins to erode and weather, the harder more resistant forms are revealed. If you look at the rocks you might notice a cross cutting fracture pattern, these forms are related to this pattern too, but the concentric nature is likely a kind of liesegang banding.

Finally a favor to ask. The tafoni at Bean Hollow (south of the parking lot) are pretty sacred to me. I have been studying them for quite some time and this beach is one of the most equisite examples of tafoniworldwide, but many of them are quite delicate. If you do share this space with others, please tread lightly. They take lifetimes to form.

This entry was posted in John Vonderlin, Jon Boxerman, Tafoni. Bookmark the permalink.