From the San Mateo Times & Gazette

We have had some little excitement during the last week. The steam signal, at Pigeon Point, was put up for the purpose of warning vessels during the heavy fogs, to keep off shore. The (?) in charge get steam up to ninety pounds; then whistle six times; water then gives out; then a rest of four hours for a supply of water to generate steam to blow again takes place. The noise is like a stuck hog, or at a distance, like a cow in distress.

Mr. Pinkham, first night he heard it, three miles off the Point, mistook it for the (?) of a cow, and being certain that a grizzly was preying upon his stock, he quickly repaired to a field where the cattle were, with a party of five or six armed men to do battle service.

The next day revealed the fact that a fog signal was located at Pigeon Point–a failure. The work is proceeding under the control of (?) Marston. The brick work for the tower is under the able management of Mr. Wallace who is bound to have a substantial light house. done in a workmanlike manner. They have established a good shipping here…. 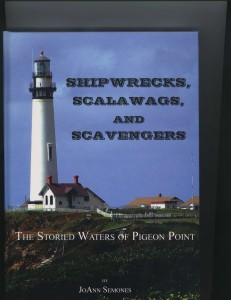