AHOY….And she wasn’t even stranded on Ano Nuevo Island….

[John Vonderlin discovers that a company makes cute messages in a bottle. All you have to do is fill in the form.] 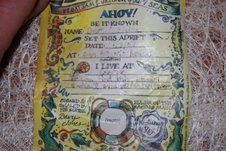 Hi June,
We found this message in a bottle just a bit south of where it was thrown in the ocean. I emailed the woman and was going to “scold” her about throwing trash in the ocean. But, she was so excited for her two young daughters, who had participated in throwing it in, I didn’t have the heart. The strangest thing is that some company makes these tags, profiting from people using the ocean as a trash can.  Where’s the Ocean Conservancy when you need them?  If pressed, I’d admit they are a welcome change from the ordinary trash I mostly find. But, you didn’t hear that from me. Enjoy. John
^^^^^^^^^^^^^^^^^^^^^^

Hi June,
I came across this picture of the bottle with its message still in it. As you can see it’s not the kind of bottle that should be thrown in the ocean. It leaked a bit, too. Enjoy. John

A note has just been received in this city which has been 5 years in reaching its destination and which shows the strange set of currents of the Pacific ocean. The note was found enclosed in a bottle at Pebble beach near Pescadero by an Italian and through his [words missing] was forwarded to this city. Crumpled and stained by the action of water, it reads as follows:

The steamer in queston is known here but is not owned by any one residing in this city, so the traveling note that has been five years on the journey has not yet reached the destination for which it was intended.

This entry was posted in John Vonderlin, Message in a bottle. Bookmark the permalink.