There is something stirring in the waters off the Coastside. Like Will o’ Wisps flickering in the swamp at night, vague signs of the upcoming non-buoyant marine debris season are appearing here and there. The oddball minor “Vomitorium” at Pescadero Point at Pescadero Beach, coughed up a heaping helping of its specialty: Aerobee Rings, swim goggles, fishing line balls and tire parts.

This always occurs in about a fifty- foot stretch of the rocky cove, right at the foot of the stairway leading down to the beach. Rangers confirm it has been doing this for a long time. Why these non-buoyant items, and very few others, should consistently be regurgitated here is a tantalizing mystery. It must have something to do with specific gravity, but I can’t fathom the details of the sorting process. I do know that out of my collection of hundreds of Frisbees, a majority come from this one spot, my Motherlode. 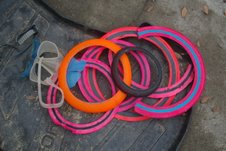 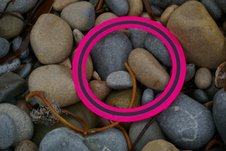 These two “new” tires were ejected by local vomitoriums, and give notice, the way a rumbling volcano does, that something is getting ready to blow. At those times, I feel like a seagull at the dump, one who senses the pile is going to have a landslide, and during the process, who knows what delicious morsels might be exposed. Caw. Caw. 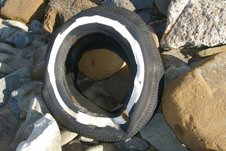 The huge hawser on Pescadero Beach was another positive sign of things to come. That completely waterlogged thing was a beast.

Getting it across the rocks, then up Pescadero Point’s cliff was a real challenge. It was great to get it home, unknotted, and cleaned up. A true museum- quality- piece- of- marine- debris. I’m trading Meg some buoys and driftwood for her salvage rights, as she saw it first, a critical fact in the world of beachcombing. 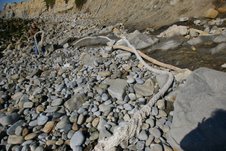 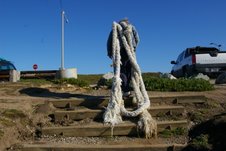 While I consider these “signs” of things to come interesting, (with the Aerobee and goggle vomitorium mysterious as well) none have the supernatural aspect some might see in this next matter.

Angelo wrote me after I mentioned the tunnel just north of the Pescadero Beach’s northerly parking lot. I had commented on it possibly being used for explosives storage during WW II or during the construction of Highway 1. Having visited it before the War, Angelo felt it was from an earlier time, possibly related to the Ocean Shore Railroad grading. a bore tunnel or? Well, he might be right.

I reviewed Bobbi Pimentel’s letter, which I mentioned along with several other Pescaderan’s memories about the tunnel, and see that when I read it with just one eye (my excuse) I didn’t get the full picture. Bobbi wrote:

“My Dad, Robert (Bob) Ballard was born in Pescadero along with 11 other brothers and sisters….he took me to the tunnels on several occasions and told me that they were used to store guns and ammunition during the war.  He helped ‘build’ them.  I do not recall where the others were although I do remember that they were mostly on the coast.”

Bobbi Pimentel may not have been talking about the parking lot tunnel as I had initially assumed, but about the two others I’ve also written about (Prankster’s tunnel and the W.W.II observation tunnel south of “The Cracks.”) I’m going to email her and see if she remembers anything further.

My curiosity about this minor mystery was further fired up by a document on the “PowerPoint Presentation for the Pescadero Marsh.” I noted on a General Plan map document from the 1960’s that two tunnels were marked. The first is the “Hole in The Wall” in the promontory that serves as the south bank at the opening of Pescadero Creek, constructed, probably in the last hundred years, to regulate the opening of the creek. The second is this tunnel. Even more interesting to me, was that the apparently hand drawn symbol for the tunnel has a parenthesis style squiggle, indicating an opening, on both ends. 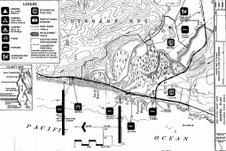 Well, we went out there, stomped all around, and I’m real sure there was no opening on the north end. Where the map indicates it should be, there’s a sheer hundred- foot cliff and there’s no sign of anything. Plugging a tunnel leaves evidence. For now I believe it was a cave. Why and when it was constructed, and by whom, remains a mystery.

But, while investigating it online, I came upon a bit of pareidolia, that if I were supernaturally inclined, might have me weaving a wild tale about the “Haunted Tunnel” that was closed after the “Tragedy” and never spoken of again. While reviewing all the pictures on the California Coastal Records Project, I noticed this oddity on Picture #198640287. 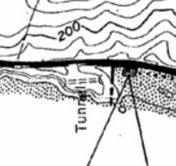 Blow it up, and it looks like this: You can still see the human face very clearly. It reminds me of a face in the background found in many classic paintings. But, who is it? And what forces created it? 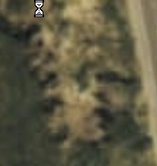 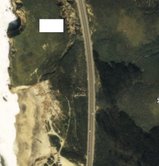 This anomaly is just above the site of the former tunnel. Is it related to the tunnel?

It looks like there was a path from the parking lot to the site of this anomaly. Was it a memorial? Could there have been a murder? a tragedy? associated with the tunnel that has left it haunted?  Or covered up and “forgotten” by the local populace? Probably not, but I wouldn’t mind knowing the full story of this former “Hole in Pescadero.” I’ll keep looking. Enjoy. John.