Alligator Rock Opens the Door to the South Coast 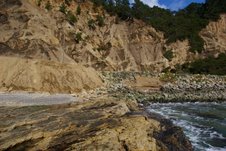 Hi June,
Here’s a story from the March 2nd, 1902 issue of “The San Francisco Call,” that deals with the treacherous passage around “Cape Horn,” as the spot at Alligator Rock, San Mateo’s southerly coastside entrance, was called. Enjoy. John
P.S. I’ve attached a picture looking down at Alligator Rock and showing about where the stage road would have been. There’s also a picture looking east from the end of the rock showing the remnant of the bluffs they had to get around. Also a picture looking north from the rock showing the view visitors to San Mateo would have first seen. Lastly a photo from the end of the rock catching some spray that almost got us. 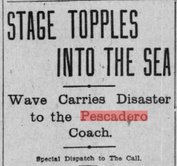 SANTA CRUZ, March 1.—The Pescadero
stage had a narrow escape from a disas –
ter yesterday, and that no lives were lost
is remarkable. Twenty miles up the
coast the stage travels along the beach,
which, at high tide, is often covered by
water. Yesterday the ocean was higher
than at any time ln thirty-five years. In
the center of the beach it is very rocky
and rough, with water on either side.
When Driver James Harvey reached this
point a monster wave dashed against the
stage and upturned it.
For two hours the horses, Harvey and
the single passenger, William Steele,
floundered in the cold waters of the Pa –
cific. Fortunately both men were good
swimmers. The horses were cut loose and
found their way to dry land.
Help arrived and after several hours
work the stage was turned over. It was
badly demolished. The vehicle weighed
1600 pounds and was hard to handle. The
top nad been broken off-by the wave, the
iron on the tongue snapped and the dou –
ble-tree ‘broken. The iron rim around the
hub struck the rocks with such terrlflc
force that it was bent as though of tin. ;•
Special Dispatch to The Call.
Wave .Carries Disaster
to the Pescadero
Coach. 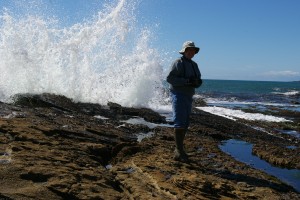