Hi June,
This is the next chapter in the Cowell/Majors Breach of Contract dispute. It appeared in “The Morning Call,” issue of December 23rd, 1894. Things are not looking good for Antonia. Enjoy. John 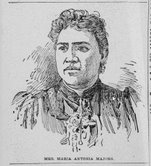 A STRANGE CASE.
Mysterious Disappearance
of Mrs. Majors.
LEFT HOME A MONTH AGO.
And Nothing Has Been Heard of
Her Since.
SHE TOOK HER CHILD WITH HER
Her Relatives Believe She Has Been
Abducted or Foully Dealt
With.
Santa Cruz. Dec. 22.—Relatives of
Mrs. Robert Majors believe she has been
abducted, for she has not been heard from
by them for over a month. She is the
plaintiff in a suit brought about a month
ago for $50.000 for breach of promise
against Harry Cowell, son| of the late
Henry Cowell, a millionaire of San Fran –
cisco.
The suit was originally brought in this
county and subsequently transferred to
the United States Circuit Court, as the de –
fendant is now a resident of Washington,
having left here soon after suit was com –
menced. It was a long time before papers
could be served on him, as plaintiff’s at –
torneys did not know his whereabouts.
One day he paid a flying visit to this city
and then the summons was served.
Mrs. Majors, who is the mother of seven
children, resides near where are Cowell’s
kilns, of which defendant was superin –
tendent. She alleges that defendant had
intimate relations with her on a promise to
marry, and that a child was the result.
Recently Mrs. Majors, who has been re –
siding with relatives here, was visited by
a man named Patterson, who claimed to
be a San Francisco private detective. He
was accompanied by a woman and the
next day after their appearance Mrs.
Majors said he came to look after her pri –
vate affairs. He was not known to any of
her relatives, it is said that she mort –
gaged her place for $5OO and gave the de –
tective $40. When she left with the de –
tective and tbe woman she said that she
was going to San Francisco to prose –
cute her case against Cowell and place the
child in an orphan asylum.
She also promised to write to her rela –
tives, but not a word have they received,
nor have they found any one who has seen
her since she left. They believe that she
has either been abducted or met with foul
play. Mrs. Majors is a woman wbo
weighs probably 200 pounds, of dark com –
plexion and about 35 or 40 years old