Pigeons at Pigeon Point? Maybe…Maybe Not
Hi June,
I was able to find the source of the suggestion that Pigeon Point might have been named for pigeons, rather then the wreck of the Carrier Pigeon in 1853. It’s in a lengthy article entitled “The Pigeon Point Lighthouse.” It appeared in the May 24th 1896 issue of “San Francisco Call.” The relevant excerpt says:
“Pigeon point is the only cape of any importance on the coast of California with an English name, but when, why, and by whom it was christened is not a matter of record in the lighthouse annals. There is certainly nothing about the place to suggest such a cognomen, nor are pigeons generally seen in the immediate vicinity. Old residents of Pescadero say that it got its name from a carrier pigeon station that was on the point years ago. The birds were used to carry the names of ships to San Francisco as soon as they were sighted. Of this there is no record, but it is known the Merchant’s Exchange had a semaphore station there in 1865. In weather when the semaphore could not be seen the dispatches were sent by horseback riders. If pigeons were ever used for the purpose, it must have been for a very short time, or many years previous.”

While I was glad to find the reference, it seems pretty shaky in reliability. I think the wreck of the Carrier Pigeon as the source is a lot more likely, given the newspaper reports I mentioned in the previous posting. Still, the carrier pigeon message systems were real on the coast, as I’ll show with an article about pigeons, the Farallones and the arrival of a notorious serial killer. Check out the Headlines from the article that I’ve attached as a ScreenShot and imagine translating this if English was a second language for you. Enjoy. John 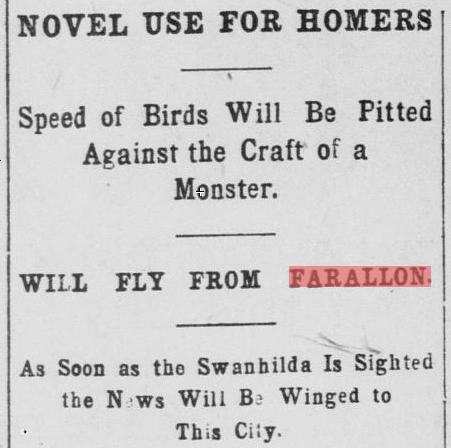 NOVEL USE FOR HOMERS
Speed of Birds Will be Pitted Against the Craft of a Monster.
WILL FLY FROM FARALLON
As Soon as the Swanhilda Is Sighted
the News Will Be Winged to
This City