Image: (close-up of the Loren Coburn home on what was then called San Gregorio Street, and today is called Stage Road.] 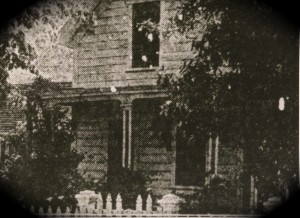 [Note from June]:  I’d like to mention that many of the folks who appear in 19th century bios paid for the pleasure of appearing on the pages of the book.]

Hi June,
This bio is from the 1883 San Mateo History book. Is the use of Coburil an OCR typo? I suppose so, but I’m too lazy to spend 10 minutes getting to the particular page scan. I’m interested, as a search of Coburil might turn up something I haven’t seen in the Archives. Enjoy. John
Loren Coburil. Brookfield, Orange county, Vermont, was the birthplace of
Mr. Coburn, the date being January 11, 1836. When eighteen years of age
he removed to Massachusetts where he remained until he started for California,
in 1851. Leaving New York on the steamer Falcon for Cuba, he crossed the
Isthmus, taking passage at Panama on the steamer Panama, arriving in San
Francisco June 1, 1851. Mr. Coburn at once proceeded to the northern mines,
via Sacramento and Greenwood valley, remaining four months at the placers of
the Middle Fork of the American river. Returning to San Francisco with the
intention of again visiting the eastern states, he was induced to embark in the
livery business at Oakland where he remained four years, finally disposing of
his business and purchasing another of similar character in San Francisco
which he conducted for about eleven years. In the meantime he had pur-
chased the Butano ranch, containing four thousand four hundred and forty-
four acres, and afterwards added the adjoining Punto del Ano Nuevo ranch, con-
taining four leagues, to his estate, by purchase. He then sold his business in
San Francisco, leased his ranch to the Steele brothers in 1862, and in 1866
went east, where he remained until 1868, when he returned to San Francisco.
In 1872 the lease of the Steele brothers having expired, he removed to Pigeon
Point and assumed charge of his property, and has resided there ever since.
When Mr. Coburn returned from his eastern trip, he bought ten thousand
acres of land on the Salinas river, in Monterey county, and has since pur-
chased large tracts of timber land near the home ranch at Pigeon Point. His
business at this place is dairying, stock raising and shipping. Mr. Coburn is
eminently a self made man. His entire career has displayed a force of char-
acter and indomitable energy, which, in the long run, never fails to land the
possessor of these qualities on the top round of the ladder. He has amassed
quite a fortune, but one would not observe that from his conduct, for he is a
plain, every-day man. He is married to an estimable woman, who has in the
past, and is now contributing her share towards leading a contented and
happy life.
[Image below: A young Loren Coburn] 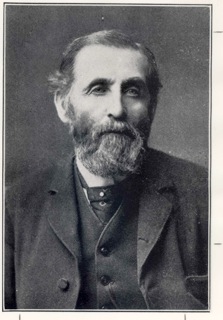