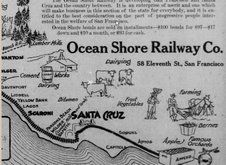 [Image: “The Ocean Shore Railway is developing San Francisco and Santa Cruz  and the country between. It is an enterprise of merit and one which will make business in this section of the state for everybody, and it is entitled to the best consideration on the part of progressive people interested in the welfare of San Francisco. Ocean Shore Bonds are sold on installments–$100 bonds for $97 –$17 down and $10 a month, or $93 for cash.” ]

This large Ocean Shore Railway ad from the January 4th, 1909 issue of “The Call,” has a few interesting things in it. That is besides, the never-to-be hopes of the company’s boosters captured in this drawing. First I noticed in their dreams, I could have stepped off the train at “Coburn’s Hotel,” at Pebble Beach for a pleasant stay. And surely, you could see the vast Purisima (sic) oil fields as you chugged by them. And you could stop at Ebalstone between Vallemar and Rockaway Beach. That’s new to me. You are the only person on the Internet who has written about it. I see that was the Ebalstone and Ransome Quarry. Oddly, “Ebal” is Hebrew for stone.

There is also a ton of well-reasoned text in this ad that lays out the state of the OSR and all the reasons why success is assured for their efforts. This is too nice a drawing to ruin, though. Any railroadman seeing this would know the Coastside was ripe for the Iron Horse’s brand of development. One hundred years later, I can still see why and yet know why not. Enjoy. John