Is the Anderson Bridge Still Standing?

I asked John Vonderlin: Is this a photo of Anderson Bridge? Is it still standing?

John said:
I believe the attached photos are of it. The photo you sent was of the bridge in its early years. I believe it was rebuilt in 1937 along with the other bridge slightly to the west. Then the railing was replaced a few years ago in a manner similar to its reconstructed style.

I believe it is the bridge right in front of the former “Flamingo House.” Unfortunately, I couldn’t find the Caltrans’s Bridge 40 designation on it. There was the plaque 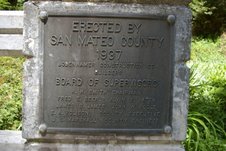 from 1937 though. I’ll include articles about the Flamingo House, plastic flamingos, the bridge railing project and a few pictures. The pictures are of the plaque, the bridge, the former Flamingo House driveway, and the bridge from the creek. Enjoy. John 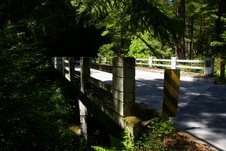 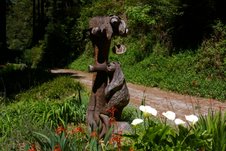 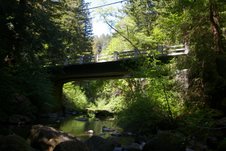 To read the article about the Flamingo House in Loma Mar, written by Joe Oesterie, click here