The next “Sister” to the south is the Acid Beach Arch. I’ve shared a few photos of this previously, both cliff-top and beach level shots, but here’s one of Larry Fitterer 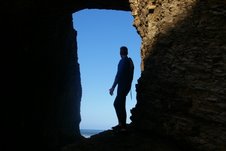 who accompanied me down the cliff, standing inside it.

What amazed me most was, as Larry related in his email that you posted, was that his “ordinary” route down the cliff in the mid-90s, the northern route, included climbing down the cliff and across the top of the arch. Looking at this picture of the route along the descending ridge, that seems pretty crazy. 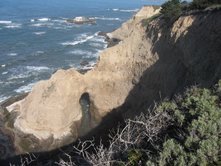 But if you go to the California Coastal Records Project (CCRP), and look at the 1972 picture, (#7219065) you can see a faint path to the head of the chute that people used to descend to reach the ridge above the arch. When Larry was climbing down in the 1990s, it must have been hairy, as the path was steeper and the arch’s roof narrower than in the 1970’s.

If you’re braver, or crazier then me, start by examining picture #6419 (Acid Beach captioned) to get a good idea of what you’ll face. Then just be sure you straddle the knife-edge of the ridge as you descend and be prepared for a vertical jump down of more then twenty feet onto the roof of the arch. After you tightrope- walk across that, continue along the ridge on the other side of the arch and you should be able to find somewhere to safely slide down. Oh, and plan on climbing out a different route, as I wasn’t even able to climb the highly fractured rock up to the top of the arch from Acid Beach to get a “conquering” photo.

The southern route we used is much “safer.” It starts with a steep scree-littered chute at the southern curve of Acid Beach Cove. But the chute has several zigzags, allowing you to slow yourself down before you fly off the cliff, should you start sliding. 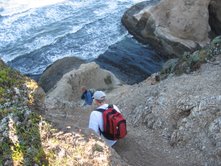 About one- third of the way down, the chute ends, and the crumbly cliff drops about ten feet down to a moderately steep scree slope that descends all the way to the rock shelf just above the ocean. By easing yourself on your butt a few feet down the ten- foot drop, then jumping to the south (left) where the scree slope is a few feet higher, it’s not too hard getting down safely.

As I mentioned previously, during my first climb back up, I loosened a lot of the crumbly hand and footholds, making climbing back up this way again very risky. Which is why you should bring a rope and attach it to the two poles someone drove into the rock at the bottom of the zigzag chute. Throw the rope over the cliff to the north, and you should be able to easily climb up and down a narrow trail that hugs the cliff. Unfortunately take this route, and just one mistake sends you hurtling all the way to the rocks 75- feet below on the beach; something you’ll be very aware of as you climb down. 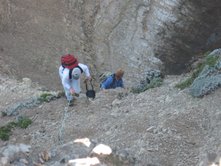 Once you reach the scree slope, climb down it and walk along the spine of the promontory to its end. 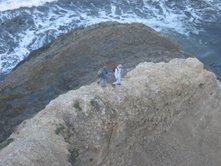 An easy climb down gets you to a ledge from which you can access Acid Beach and the arch to the north if the tide is low. 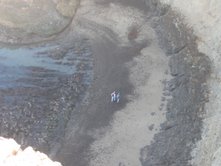 Or you can head south to reach the small cove between Acid Beach and Warm Water Lagoon. To do the latter, you climb over the arch leading into the cove and follow a small ledge to its end.

Conveniently at the end, someone has recently tied a small ladder to a pipe where there had only previously been a rope. Undo that, lower it, climb down and you are in the coolest little cove I’ve ever seen.

On the north side you’ll see a tunnel that forms the arch you just climbed over, and on the south side is the unique double Y-shaped Arch. There is also, or at least was, a small waterfall that pitter-patters down the sheer cliff to gently spatter on the wet sand exposed by the low tide. A very special place with a lot going on in the space of fifty feet. I hope you’ll enjoy it as much as I did. Much more to tell. Enjoy. John
.