John Vonderlin (JV):   Thanks, Russell, for the answers to my questions. As I thought, your cabin was in the heart of the “Forbidden Zone.”  When I look at the 1972 pictures of the ranch I can’t help but think of a wondrous Hippy Heaven. Of course the pictures don’t show the thorn in Paradise, the unrelenting wind and frequent foggy cold weather. I couldn’t help but notice how big the body of water on the ranch was in 1972 when compared with the 2005 picture (#200506666) Was there a small impoundment on the creek? Is that White House Creek? (the caption says White Horse Creek on …6665. I assume that’s wrong.)

Russell Towle (RT): Green Oaks Creek. The road in to J&M’s climbs over the dam. In one or more of the pictures you can see the deep steely blue the lake takes on with its waters ruffled by that pesky NW wind. JV:  The CCRP picture you sent with numbers really helped me recall the area. It was probably not far from where your cabin had been that I found the most unusual float in my collection (about 500) It was a semi-waterlogged two foot in diameter macramed rope bag containing buoyant material. It had a beautiful colony of 4 inch long Gooseneck Barnacles. It truly was a denizen of the Gyre, (North Pacific Sub-tropical Gyre) blown eastward from its travels by weeks long westerlies. Well worth carrying the more then a mileout the Cascade Creek trail to Highway 1 even though its water-soaked weight was close to a hundred pounds and it was moderately slimy and stinky.  Unfortunately, it has been several years since the Gyre hasdelivered the quantities of wonders that it did that year. RT: You are quite the collector! JV:  Did you look at the 1972 picture (7219022) just north of the one you put the numbers on? It shows the just inshore dune area from a different angle. It may be wishful thinking but I swear I see building or at least a roof line at the spot you indicated. The other cabin just south of yours seems clearer too. On the CCRP website they explain the origin of the 1972 and RT: No, I did not look at the more northerly photo. If anything shows it would be the *second* location of my cabin. The first location was on a little bluff of marine terrace seds stained red, showing that they had been uplifted above sea level fairly long ago, and had been near the land surface for a goodly time. That degree and color of iron oxidation is significant. The little red bluff was maybe ten feet above mean sea level. In December 1969 I went there to clean it out before moving in (it had been built the previous summer by some artist friend of Merrill’s if I recall). There had been a major winter storm raging for a week. I was rather amazed to see the ocean essentially at the level of the cabin, with waves crashing against the seaward side, and sweeping all the way around on the landward side, and pouring in the door. I was going to live there? It took a while before I realized it was that unique combination of a sustained powerful storm *and* the annual highest tides, which occur around New Year. Perihelion combined with a full moon or a new moon, if I recall. But add an unusually powerful storm and you have an ocean which will effect incredible erosion. JV: 1979 photos. The original slides were lost, but somebody found copies in storage a few years ago. There is a tab on the CCRP Home page that explains how they restored them, and integrated them into the newer collections, but little more. It is possible they weren’t even shot in 1972. Is there anything in the pictures that would help you date them. RT: Well. Maybe there is. You see, in the supposedly 1972 photo you can see a camp trailer thing parked by J&M’s house. That would be Merrill’s brother’s trailer. But I can’t remember when he left. Then there is the pickup truck with its camper shell. That could be Ken’s truck. He was an older hippie who camped here there and everywhere. He may have arrived in 1972 but I can’t recall. The Tower is gone and I think it came down in 1971. And I think we do see Pete Moss’s Second Cabin, such a work of art, built in 1971. Hmm. There is a funny rectangular thing down by where J&M’s road finally hit the beach. You couldn’t drive the last bit, at least, we never did. I think that rectangular thing is the roof of a beach sauna. We used to heat up rocks in a big bonfire and carry them inside in wire baskets. Heck back in 1969 we had several raku open-air firings of pottery right on that beach, pottery made form the very beds of clay exposed in the winter. Everything in the photo seems OK for 1972 to me. JV: In regards to your timber. The placard at the Interpretive Center says the barns were built in the 1880s using timbers salvaged from a local wharf. The “local”est definitely would have been Waddell’s Wharf. I think your timber has an interesting history you might want to know. Here’s a little excerpt I grabbed from the Internet from a hiking blog about the wharf and the southern “cheapskate” entrance.

” Last week we hiked to Waddell’s Mill in Big Basin State Park. I mentioned that Waddell’s cut timber had to be hauled on mule-drawn carts over wooden rails through the canyon to the coast for shipping. Waddell’s plans for a wharf at the mouth of Waddell Creek were foiled by bedrock that made it impossible to drive piles for the wharf. His solution was to extend the rail line north to a wide cove on Point Ano Nuevo, from which he built a long pier to deep water.

“This week’s hike takes us to that cove from the south–or informal—entrance to Ano Nuevo State Reserve. The trailhead is located one-half mile south of the reserve entrance road. Watch on the west side of Highway 1 for a brown painted gate that stops vehicle traffic. Just beyond is an off-road dirt parking area for a dozen or more cars. Pass around the gate and walk on the old asphalt road, which is the old Highway 1. Take care to stay away from the poison oak that lines both sides of the road. In a block or so the path turns north, and you can see the large cove and expanse of Point Ano Nuevo ahead. The path crosses an old concrete bridge that spans Ano Nuevo Creek deep below. The width of this bridge indicates that it is for one-way traffic only or that vehicles using it were very, very narrow.

“Cross over the bridge to a trail junction. Straight ahead and up will bring you to the Visitors Center, but turn left down to the wide beach. Along the water’s edge, you will sense that this sheltered area behind the bluff was probably the ideal place for Waddell to build his wharf. Old photos show the wharf placed around the area where a clump of trees lines the bluff. From there, the wharf extended 700 feet over the beach to deep water. At the end was a swinging chute that lowered lumber to a schooner below. The wharf was completed in 1864, and according to Stanger, was handling two million feet of lumber a year by 1867. Other mills along the coast also shipped from the wharf.”

This is the last we hear about William Waddell. In 1875 he was mauled by a grizzly bear while hunting deer with his friend John Bradley and died of complications soon after. I’m attaching  old photos of the Wharf  and the railroad the blogger above mentioned . They are parts of 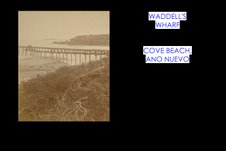 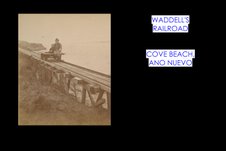 Muybridge stereographs. I think I have a picture I took of the rough-hewn appearance of the beams in the barn. I’ll reduce it and send it if you want to compare them. How small a file do you need? Are the ones I attached too cumbersome?

Past midnight, gotta get ready for tomorrow’s struggles. Enjoy. John. RT: Hmmm. I don’t think I ever heard of the Waddell Wharf. Interesting. The “broad beach” is part of the Coastways Ranch mile of beach which Hank Bradley used to patrol daily in his jeep. If he saw anybody on the beach *above* the mean high tide line he would stop and have them sign a form explicitly stating that they used the beach with permission from Coastways. This would protect the value of the beach when the Park would eventually buy it, or so Hank thought. My sense of the barn timbers I have is that they were hewn from local sources. I would be amazed if they had been salvaged from the wharf. If the wharf was for a lumbering operation, then why use hand-hewn timbers in it at all? More sense to saw your 12X12’s at the mill and run them down to the wharf site on your railroad. Senseless to hew timbers of you have a mill. And my timbers are hand-hewn all the way. We have a lot of old logging railroad roadbeds around here from the 1870s to the 1920s. The older ones will sometimes still have a few ties lying about. These were all narrow-gauge railroads. And what few old ties I have seen were hand-split, not even hewn to speak of, just split, Incense Cedar. So I should not argue that just because a logging railroad goes to such-and-such a place, only sawn tiber would ever be used, because I have seen for myself that hand-split cedar ties were used. Very interesting stuff, John. I love history.